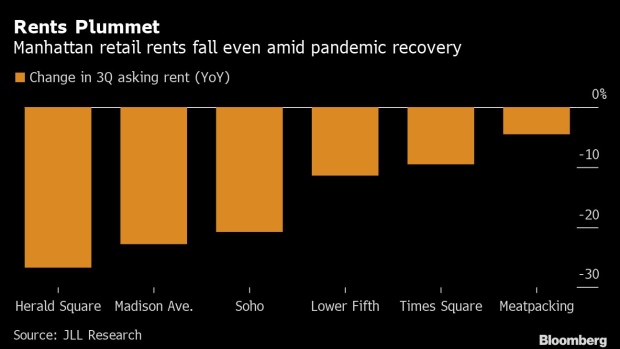 A retail space for lease in the Soho neighborhood of New York, U.S., on Wednesday, April 7, 2021. There's much at stake for New York City, where commercial real estate has taken a hit over the last year. Empty storefronts erode the street's appeal for the eventual return of tourists, about two-thirds of whom vanished in 2020, according to NYC & Co., the city’s marketing organization. Photographer: Amir Hamja/Bloomberg , Bloomberg

(Bloomberg) -- Manhattan retail rents plunged again, even as the city starts to come back from the depths of the pandemic.

Average asking rents fell almost 12% in the third quarter from a year earlier across all major Manhattan shopping corridors, including Fifth Avenue, Times Square and Madison Avenue, Jones Lang LaSalle Inc. said in a report Thursday. It was the biggest decrease in five years, the brokerage said. Herald Square saw the largest decline in rents, with a 27% drop, as the priciest spaces were taken off market, the firm said.

Retail supply remains elevated, with availability at more than 27%, with a jump in sublease additions from the second quarter, JLL said. Tenants still have the upper hand, with new leases including as many as nine months of free rent and some allowances for store improvements.

Retail districts in Manhattan have been crushed by the Covid-19 crisis, which emptied the city of office workers and tourists. Residential areas such as the West Village and Upper East Side have seen more activity compared with commercial districts like Fifth Avenue and Herald Square, which are largely reliant on commuters and international travel.

Madison Avenue’s rents were down 23% from a year earlier, while Fifth Avenue between 42nd and 49th streets saw rents drop 11%, according to JLL. Even though SoHo saw the largest share of new leases in the city, space availability remains high, at almost 35%, with apparel retailers continuing to struggle.

Across Manhattan’s major retail districts, leasing volume rose almost 13% from the second quarter, but remains down nearly 57% from a year earlier, JLL said.