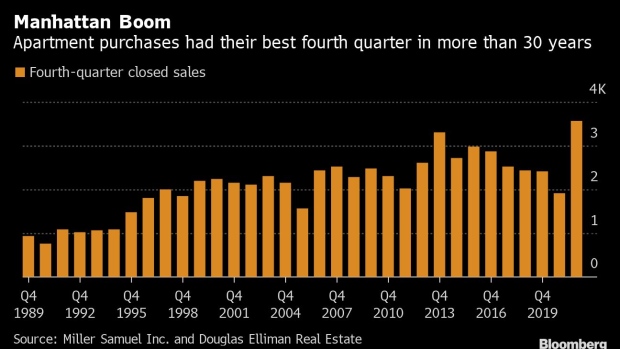 (Bloomberg) -- Manhattan home sales reached a fourth-quarter record, capping a comeback year for a market that took a major hit earlier in the pandemic.

Closed purchases of co-ops and condos totaled 3,559 in the three months that ended in December, the most for the period in more than 30 years of data-keeping by appraiser Miller Samuel Inc. and brokerage Douglas Elliman Real Estate. The median price of all apartments that sold rose 11% from a year earlier to $1.17 million.

Home sales have been on a tear as growing vaccination rates and the reopening of restaurants, shops and Broadway draw New Yorkers back to the city after so many fled for the suburbs in 2020. Many companies also have made plans to bring workers back to offices eventually, even while Covid-19 cases rise. The robust demand is helping to chip away at a mountain of listings.

“For the next several quarters, we’re going to see above average sales activity and that is going to go a long way to bring down inventory levels,” said Jonathan Miller, president of Miller Samuel. “One of the things that has differentiated the Manhattan market with the rest of the country has been that it was late to the party, and the city’s boom in activity really started at the beginning of 2021.”

There were 6,207 homes for sale in Manhattan at the end of December, down 25% from a year earlier and the biggest annual reduction in seven years, the firms said in a report Tuesday. The supply is still hefty -- just below what it was in late 2019, but higher than pre-pandemic averages.

With competition increasing, bidding wars were also on the rise: The share of deals that closed above the asking price was 9.2%, the highest since early 2018, according to Miller.

While rising values and tightening inventory may discourage some deals in the future, signs point to 2022 being another solid year, according to Bess Freedman, chief executive officer at brokerage Brown Harris Stevens, which released its own report on Manhattan home sales Tuesday.

“The good news is that the foreign buyer has returned, Wall Street bonuses are incredible and we have a new mayor, which all bodes well,” she said. “Now, because pricing has ticked up a bit, it could slow things down with mortgage rates going up, but we’ll have to see.”