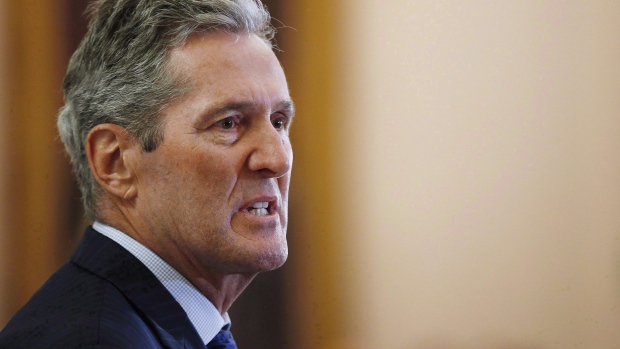 WINNIPEG -- Manitoba Premier Brian Pallister did an about-face on carbon taxes Wednesday, abandoning plans to start charging a levy in December and joining other conservative leaders in flat-out opposition to federal plans.

Pallister announced a year ago he would enact a $25-a-tonne carbon tax and keep it at that rate. That would have increased the price of gasoline by 5.3 cents a litre and raised other energy costs.

The federal government has said provinces have to enact a cap-and-trade system or a carbon tax that would start at $10 a tonne this year and rise to $50 a tonne by 2022.

Pallister has long said his approach was legally sound, would help the environment and strike a middle ground.

But on Wednesday he said the province was pulling out completely because Ottawa has not backed off on threats to backstop Manitoba's tax with its own, higher rate.

"That respect hasn't been forthcoming. The uncertainty remains and, if it isn't addressed, it's going to affect our ability to attract business capital," the premier said.

"We're forced to either fight (the federal government) in a year, when they invoke a higher tax .... or to stand up to them now. We're choosing to do it now, not then, because we hope that this will give clarity sooner than if we wait."

Pallister also left the door open to joining Saskatchewan and Ontario in legal action against the federal plan.

"There is a course of action other provinces have chosen to pursue and it's something we're going to have to look at."

"Now that another province has said no carbon tax for their province, will this prime minister recognize that a carbon tax penalizes Canadians, penalizes farmers ... penalizes industry... (and) does nothing to help the environment?"

Prime Minister Justin Trudeau said his government would rather provinces enact a carbon tax themselves, but if they don't, Ottawa will do so and return the money collected back to Canadians.

"I continue to find it puzzling as to why Conservatives insist on making pollution free," Trudeau said. "We believe that polluters should pay and that's why we are putting a price on pollution."

His promise to cut the provincial sales tax by 2020 --a key campaign plank in the last election -- remains firm, he said.

Pallister said he tried to co-operate with the federal government.

"I've tried to play defence as long as I can. The federal government isn't giving. We gotta fight."