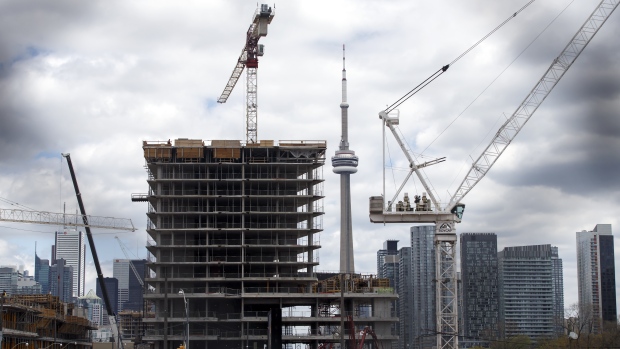 The CN Tower stands behind a condominium building under construction in downtown Toronto, Ontario, Canada, on Thursday, May 10, 2018. , Cole Burston/Bloomberg

A one-bedroom condo plus den listed at $648,000 in Toronto’s east end has been sitting on the market for weeks. A similar unit in the same building priced $69,000 cheaper ended up selling way over asking.

Whether it’s an apartment in a glitzy new skyscraper or a mansion in exclusive Forest Hill, pricing has become paramount as Canada’s biggest city heads into the busy spring property season. As the market stabilizes after a year of plunging sales, condos sales are a mixed bag and big detached homes are hard to shift.

“The right product, in the right location, at the right price will get lots of interest and likely multiple offers,” said real estate agent Justin Wu, who’s handling the condo that’s still on the market. “Others take more work to sell.”

Home sales in the Toronto region have dropped 37 per cent from their peak in 2016 while prices are down 4.4 per cent since maxing out at $815,200 in May of 2017. Re-sale condo listings swelled about 10 per cent in the first quarter from the same period last year, according to research firm Urbanation Inc.

Canada’s federal housing agency lowered its assessment of the overall vulnerabilities in the national market to “moderate,” from “high,” according to a report Thursday. While there remains a “high degree of vulnerability” in Toronto and Vancouver, prices are moving closer to levels supported by fundamentals. 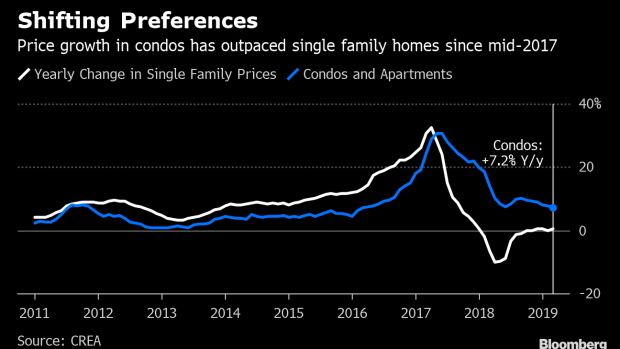 Housing across the country has been adjusting amid tighter mortgage regulations, taxes on foreign buyers and other measures designed to curb runaway prices and household debt, particularly in Vancouver and Toronto. While Vancouver’s market is still sinking, an influx of about 100,000 immigrants a year is providing an underpinning in Toronto, especially for condos.

“The price differential between the average price of a condo apartment and a low-rise home has narrowed to its lowest level in four years, which is creating more supply competition for condos and sparking some move-up buying,” Shaun Hildebrand, president of Urbanation, said.

For first-time buyer Adam De Biasi getting into the condo market was a totally nerve-wracking experience.

“Every delay I had, another condo would slip through my fingers,” the 24-year-old engineer-in-training said in a phone interview. He felt if he didn’t get into the market he’d be living in a “shoebox” by the time he was ready to move out of his parents home.

After months of searching -- and losing out -- he finally landed a one-bedroom in a presale project launched by Menkes Development Corp. north of Toronto that met his his budget of about $400,000. It’s right by the subway line and close to the highway.

He got lucky, said Simeon Papailias, De Biasi’s agent. The sales office was “mayhem” as buyers and agents begged for units in that pricing sweet spot. That same week, Papailias went to another presale condo launch by CentreCourt Inc. and SmartREIT, which sold out in three days. He had to weave through almost 3,000 agents competing for 490 units.

“The minute anything launches -- $800 per square foot -- and connects to Toronto by subway, there is a complete frenzy,” he said.

Single-family homes are a different story. Prices across the city were up just half a per cent in March from a year ago compared, with a 7.2 per cent rise in condo prices.

“There is a big challenge with low-rise, which is still suffering a lot. Even resales in established areas, it is a bit slower -- I think it’s going to change but right now it is a bit slower,” Mark Mandelbaum, chairman of Lanterra Developments, said. “With a condo, if you don’t like it, you can rent it. It’s very hard to rent a house in Markham.”

Mattamy Homes, the biggest private residential homebuilder in North America, has seen hot demand for most of its single-home property launches, according to its founder, Peter Gilgan. “Every one of those launches, priced properly, is sold out after one day or two,” he said in a February interview. Many of the projects are outside the Toronto core.

Great Gulf Group also launched a Whitby, Ontario project this month, which had steady lineups outside its sales center and sold out, according to spokeswoman Madeline Zito.

As for Wu, the agent who’s still waiting for takers on his unit in the city’s east end, it simply means having to put more work in. “This is very different from a couple years ago, when it was pretty indiscriminate” buying across the board, he said.