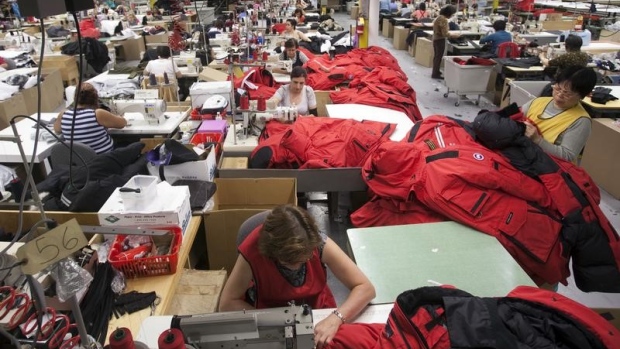 Workers piece together outerwear on the manufacturing floor of Canada Goose's facility in Toronto , Reuters

OTTAWA -- Canadian manufacturing sales in January were better than expected, the latest in a series of promising reports for the economy.

Statistics Canada said Friday that manufacturing sales climbed 0.6 per cent to $53.8 billion, the third consecutive month of growth, helped by the petroleum and coal industry and the chemical industry.

Economists had expected a decline of 0.2 per cent for January, according to Thomson Reuters.

"This was another good news report for the Canadian manufacturing sector, suggesting that the momentum in the sector that heated up in late-2016 carried over into the beginning of 2017," TD Bank senior economist Michael Dolega wrote in a report.

"The report provides some potential upside to our already solid first-quarter forecast of 2.6 per cent for the Canadian economy."

The stronger than expected manufacturing numbers followed a report last week that the unemployment rate dropped last month to its lowest level in more than two years and the economy created more jobs than expected.

Recent trade figures also indicated that the country posted a trade surplus for a third month in a row in January as exports hit a record.

The petroleum and coal products industry climbed 7.0 per cent to $5.5 billion, while the chemical manufacturing industry gained 2.5 per cent to $4.5 billion.

Regionally, sales were up in seven provinces in January, led by Ontario which grew 1.0 per cent to $25.9 billion.

Sales in Quebec fell 1.5 per cent to $12.6 billion, following two consecutive monthly gains, due to lower production in the aerospace product and parts industry.