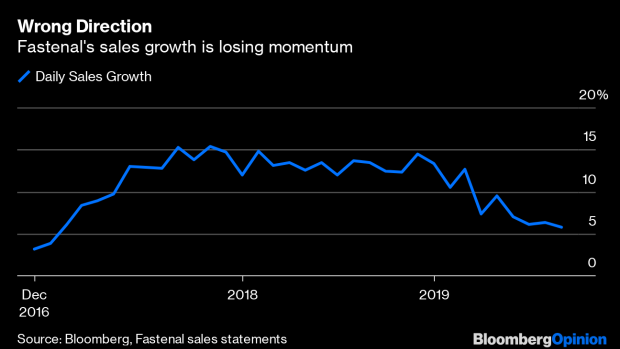 (Bloomberg Opinion) -- Maybe things aren’t so dire in manufacturing after all. At least not yet.

Fastenal Co., a distributor of factory-floor basics, unofficially kicked off industrial earnings season on Friday and the numbers were better than analysts had expected on all major fronts, including overall revenue and gross margin. That fueled a pop of  as much as 10% in Fastenal shares in early trading that probably also had something to do with the heavy short interest that accumulated in the stock heading into the earnings release. Fastenal’s better-than-feared results likely also contributed to a pre-market rally in the XLI Industrial Select Sector SPDR fund as investors rethought their expectations for a truly ugly batch of third-quarter industrial earnings.

It’s encouraging that Fastenal’s earnings were as resilient as they were in the wake of data from the Institute for Supply Management that showed U.S. factory activity had slowed to the weakest level since 2009 in September. Fastenal reported a 6.1% increase in daily sales in the third quarter, a slowdown from the previous period but not the kind of number you’d expect if the industrial economy was going through the sort of contraction indicated by the ISM data. That’s likely to draw bigger questions about the extent to which a U.S. labor strike at General Motors Co. may have affected the data. The strike is approaching the one-month mark and is having ripple effects as suppliers pile up unneeded inventory. GM’s cross-border supply chains have forced the company to stop work even at some plants in Mexico and Canada.

All that being said, it’s clear from Fastenal’s results that the manufacturing slowdown is real, and it’s deepening. While the company’s daily sales grew 5.8% in September, that’s a deceleration from August and July and the weakest monthly pace since January 2017, when manufacturers were emerging from the so-called industrial recession spurred by slumping oil prices. Among Fastenal’s top 100 national accounts, just 58% were growing in September, compared with 88% in January.

Fastenal also noted that because of slower economic activity, customers are hitting the pause button on orders for its vending machines that dispense industrial parts, lengthening the sales cycle. Fastenal has made embedded services like vending machines and onsite sales teams the linchpin of its growth strategy as it and other distributors fend off incursions by Amazon.com Inc. Fastenal now expects to sign customers up for about 22,000 vending machines in 2019, down from its previous goal of 23,000 to 25,000.

Fastenal’s numbers suggest we may still be on track for the sort of soft landing investors and analysts had been modeling for the manufacturing industry before the ISM numbers blew up that analysis. But make no mistake: the industrial economy is still moving in the wrong direction.