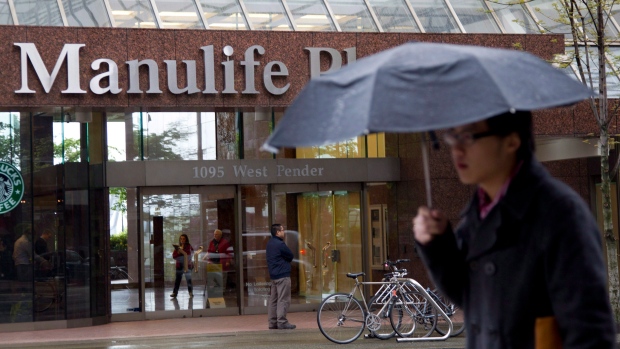 A pedestrian walks past the Manulife building in downtown Vancouver, B.C. , The Canadian Press

TORONTO - Manulife Financial Corp. (MFC.TO) says it is reinsuring some of its businesses and boosting the company's quarterly dividend by 14 per cent.

The insurance firm says it has entered into agreements with counterparties to reinsure substantially all of its legacy U.S. individual and group pay-out annuities businesses, and mortality and lapse risk on a portion of its legacy Canadian universal life policies. These transactions are expected to release over $1 billion of capital over the next year.

The dividend payout - which is coming a quarter earlier than in recent years - will increase by three cents per share to 25 cents, payable as of Dec. 19 to shareholders of record at the close of business on Nov. 30.

The Toronto-based company also says it has received TSX approval to repurchase up to 40 million of its common shares or about two per cent of the nearly two million shares outstanding.

The announcements were made ahead of Manulife's release of third-quarter results after markets close next Wednesday.

Manulife's shares have fallen about 25 per cent from their 52-week high.