Manulife Financial Corp. is freeing up $2 billion (US$1.6 billion) of capital, much of which it plans to devote to stock buybacks, as part of a deal to reinsure the majority its U.S. variable-annuity business.

Venerable Holdings Inc. will reinsure more than 75 per cent of the legacy U.S. variable-annuity block, consisting primarily of policies with guaranteed minimum withdrawal benefits, Toronto-based Manulife said Monday in a statement. Manulife said it plans to deploy “a significant portion” of the capital to buy back shares, without providing a precise figure.

Manulife is reducing its exposure to the variable annuities as it focuses on higher-growth businesses like its wealth- and asset-management operations and the Asian division. Analysts have said such a deal could help the insurer’s shares, which have underperformed those of peers this year.

“This transaction represents a significant milestone for Manulife,” Chief Executive Officer Roy Gori said in the statement. “The agreement to reinsure a substantial portion of our U.S. VA block reduces risk, releases approximately $2 billion of capital and unlocks shareholder value.”

Manulife said it will increase the size of its previously announced share-buyback program to 5 per cent of shares outstanding, up from the 2 per cent targeted earlier. The remainder of the capital from the reinsurance transaction will be used to increase the company’s excess capital position. 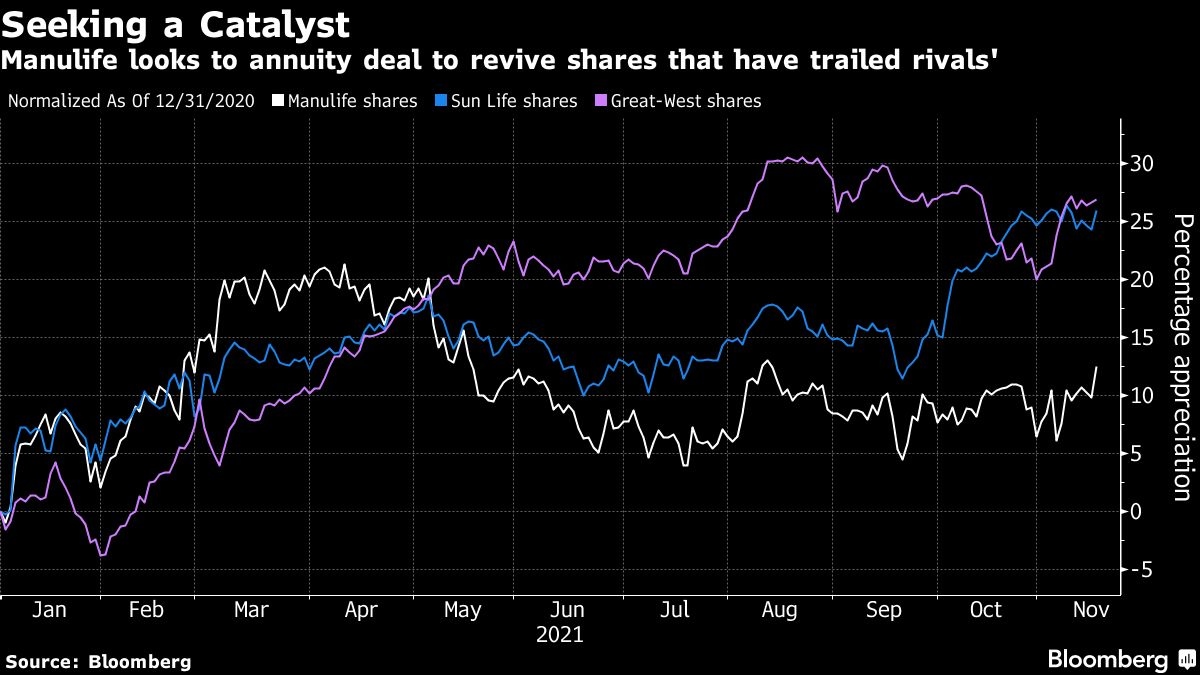 The deal, expected to close in the first quarter of next year, will cut annual earnings by about $200 million in 2022, with the effect decreasing over time, Manulife said. The transaction immediately adds to the insurer’s book value, and Manulife said it remains committed to its medium-term financial targets, including growth in core earnings per share of 10 per cent to 12 per cent.

“This variable-annuity transaction is a positive catalyst for the stock,” Scott Chan, an analyst at Canaccord Genuity Group Inc., said in a note Monday. The “deal should help re-rate shares of Manulife.”

Manulife shares rose 2.4 per cent to $25.47 at 10:20 a.m. in Toronto, topping the 0.2 per cent gain for the broader S&P/TSX Composite Index. The stock has gained 12 per cent this year, trailing the 26 per cent gain for rival Sun Life Financial Inc. and the 27 per cent advance for Great-West Lifeco Inc.

While the transaction does reduce Manulife’s risks, figures that the company released along with the deal details revealed that long-term-care and remaining variable-annuity blocks in Canada and Japan generate about 20 per cent of its earnings, said Gabriel Dechaine, an analyst at National Bank of Canada.

“Clarity on Manulife’s earnings mix may dampen enthusiasm related to de-risking the business,” Dechaine said in a note Tuesday.