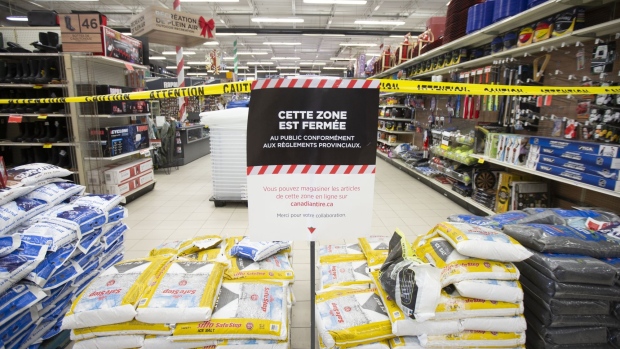 Non-essential goods are cordoned off at a Montreal big-box store to comply with Quebec public-health restrictions on Dec. 29, 2020. , Bloomberg

(Bloomberg) -- Canada’s economy and financial markets are moving in opposite directions as investors drive up asset prices in response to cheap-money policies. That trend will continue in the months ahead, according to Manulife’s Frances Donald.

The country is grappling with a fresh set of lockdowns as governments try to quell a wave of Covid-19 infections. Quebec, the second-largest provincial economy, is likely to unveil new restrictions Wednesday that will shut down the construction sector. Less than 1% of the population has been vaccinated so far, putting Canada behind the U.S. and U.K.

Meanwhile, the S&P/TSX Composite Index is near a record after rising about 8% in three months. Economically-sensitive energy and industrial stocks have surged, while bank shares are up 14% since Oct 5.

While vaccines have arrived, “the economic benefits are probably not solved before the second half of the year,” Donald, global chief economist and head of macro strategy at Manulife Investment Management, said by phone. “In 2021, my suspicion is the disconnect between the economy and markets continues.”

Economists are still predicting a strong recovery in the second half of the year, as vaccines allow for a rebound in travel, entertainment and other sectors that have been crushed by the pandemic. Even so, Donald doesn’t see a full recovery until 2022. That’s because there will be structural scarring to the economy from business closures, job losses and new ways of working.

“When we have a shock to the labor market it can take a decade to heal itself,” she said. “While Canada has fared better on most every account relative to the U.S., in large part because of huge amounts of stimulus, we’re not going to come out of this completely unscathed.”

That stimulus includes hundreds of billions in fiscal measures by Justin Trudeau’s government and accommodative policy by the Bank of Canada, which, like other central banks, has cut interest rates to historic lows.

It’s a global phenomenon that has pushed up the price of unconventional assets like Bitcoin.

“What you’re seeing in crypto right now is growing concern we have excessive monetary policy at play,” Donald said. “It’s likely we continue to see too much cash flow into places we haven’t seen before.”

Investors are becoming “more numb” to official statistics including inflation and payrolls and are focusing instead on economic data that can be measured with less lag time, such as restaurant bookings and airport security checkpoints, Donald said.

“Much of 2020 was spent recognizing traditional data were too lagged and too distorted to be valuable,” she said. “So in come new unconventional data points that showed us there were faster and more efficient ways to see where the economy was in its rebound.”