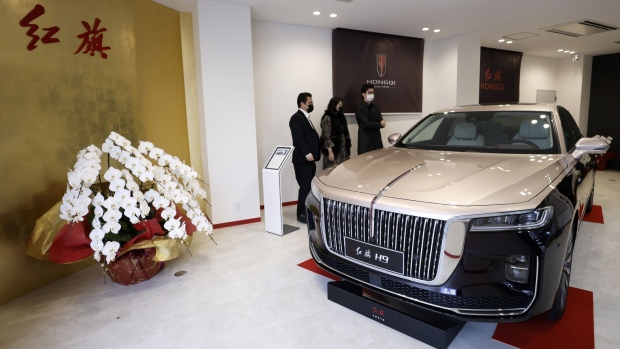 A China FAW Group Co. Hongqi brand H9 G4 vehicle displayed at the company's showroom in Osaka, Japan, on Thursday, Jan. 27, 2022. FAW, the carmaker whose luxury Hongqi model was used to transport Chairman Mao Zedong, is betting on a new audience in Japan, opening its first showroom in the country as it seeks to crack a market that’s fiercely loyal to domestic brands. Photographer: Kiyoshi Ota/Bloomberg , Bloomberg

(Bloomberg) -- China FAW Group Co., the carmaker whose luxury Hongqi model was used to transport Chairman Mao Zedong, is betting on a new audience in Japan, opening its first showroom in the country as it seeks to crack a market that’s fiercely loyal to domestic brands.

A Hongqi -- which means red flag -- dealership opened in Osaka last month and 22 vehicles have been sold so far, although they went to Chinese living in Japan, Li Wang, an executive at the dealership, said Friday. FAW’s most popular model, the H9, costs as much as 15 million yen ($130,000).

“Hongqi is special, it’s more than just a car” especially for many Chinese people, Li said. Japan has almost 787,000 Chinese residents, making up more than a quarter of all immigrants. Osaka is particularly known for its diverse community.

Although Hongqi’s main markets outside of China to date have been the Middle East and Europe, FAW is seeking to target wealthy Chinese in Japan, at least in the first instance. Foreign passenger cars command a tiny 7% of the market, which is dominated by powerful domestic players like Toyota Motor Corp. and Nissan Motor Co.

The Osaka dealership is currently offering four models, including a hybrid. An enhanced lineup this year will include a fully electric SUV and another Hongqi outlet is slated for Tokyo’s high-end Ginza district. The most expensive model, the L5, starts from 160 million yen.

One reason there aren’t more Chinese-made cars in Japan -- differing safety, emission and noise standards. The United Nations Economic Commission for Europe sets strict regulations for the export of cars into Japan, and unlike European automakers, China isn’t part of that.

Political tensions have also kept a lid on sales but as Japan strives to reach carbon neutrality by 2050, that’s slowly changing. A growing number of Chinese automakers are sending commercial electric delivery vans to Japan to help logistics companies wanting to lower costs.