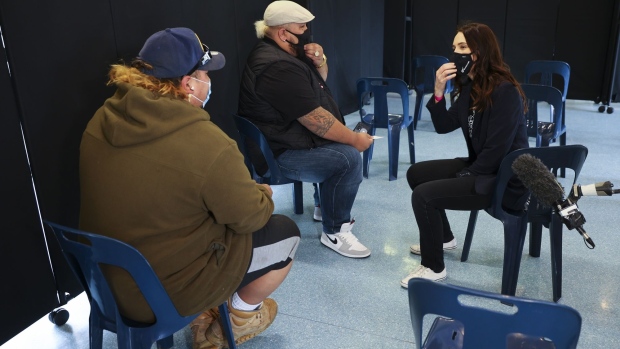 SYDNEY, AUSTRALIA - APRIL 25: A Maori warrior poses for a photograph ahead of the ANZAC Day parade on April 25, 2021 in Sydney, Australia. Anzac day is a national holiday in Australia, traditionally marked by a dawn service held during the time of the original Gallipoli landing and commemorated with ceremonies and parades throughout the day. Crowds are limited at services across Australia, while Perth events were cancelled due to lockdown restrictions following a community COVID-19 outbreak. Anzac Day commemorates the day the Australian and New Zealand Army Corp (ANZAC) landed on the shores of Gallipoli on April 25, 1915, during World War 1. (Photo by Brendon Thorne/Getty Images) , Photographer: Brendon Thorne/Getty Images AsiaPac

(Bloomberg) -- New Zealand’s ambitious plan to vaccinate 90% of people against Covid-19 before re-opening to the world may not be enough to protect one of its most vulnerable groups from the deadly virus: the indigenous Maori population.

Prime Minister Jacinda Ardern’s roadmap to begin freeing the country from lockdowns and opening the border centers on her vaccination target being met. But because Maori account for only 17% of New Zealand’s five million people, it could be achieved with vaccination rates among tangata whenua -- the people of the land -- still lagging far behind.

The statistics lay it bare: Just 49% of Maori are fully vaccinated, the lowest rate of any major ethnic group in the country and well below the 72% figure for the entire eligible population.

“Maori will be blamed for being slow, for being laggards, for being willful. This is not true,” said John Tamihere, Chief Executive of West Auckland Maori community organization the Waipareira Trust. “Vaccines in poor communities are not their priority. They are just trying to put one foot in front of the other. Those communities are deeply suspicious of anything to do with the state.”

Easing restrictions when a substantial number of Maori are still unvaccinated could exacerbate the health, social and economic gaps that continue to exist 181 years after a treaty with the colonizing British assured them of equal treatment. The Maori Party, which has two members of parliament, has slated the approach as reckless and dangerous by likening it to the Netflix program “Squid Game,” where poor people lose their lives in contests.

Health inequity has been one of the hallmarks of the pandemic, with marginalized groups suffering the worst outcomes globally.

In Australia, about 45% of First Nations people have been fully vaccinated, compared with 73% of the eligible population aged 16 and over.

In the U.S., just 44% of the population served by the Indian Health Service has received at least one dose of a vaccine. That’s far below the U.S. average of 66%. If the IHS were a state, it would rank last in the U.S., according to data compiled by the Centers for Disease Control and Prevention.

After a dream run keeping the virus out of New Zealand, Ardern is suddenly under pressure as the infectious delta strain proves a match for her strict lockdowns and spreads beyond Auckland. The nation’s largest city has been under stay-at-home orders for more than two months.

A slow start to the vaccine rollout meant the country was largely unprotected when the outbreak began in mid-August. Now, having conceded the government can’t beat delta, Ardern is rushing to vaccinate so that restrictions can be lifted.

New Zealand is falling behind its peers. Neighboring Australia will begin to reopen its border on Nov. 1 and most other parts of the world are already learning to live with the virus.

The government’s model requires the 90% vaccination target to be reached in each of the 20 District Health Boards around New Zealand, rather than across specific groups. That means even if 90% of people in a given district are fully immunized, smaller ethnic groups within the area might not be.

The target could easily be achieved while Maori rates are still “dangerously low,” said Rhys Jones, a public health physician and Auckland University lecturer in Maori health. It would be “unethical” to ease restrictions in those circumstances, he said.

“If you don’t have that specific target for Maori you could end up opening up and exposing Maori people -- significant numbers of whom may be unvaccinated -- to a very, very serious outbreak and that could have terrible consequences,” Jones said.

Dianne Sika-Paotonu, an immunologist and senior lecturer at the University of Otago, said there needed to be specific targets of at least 90-95% for Maori and people from the Pacific Islands, whose vaccination rates also lag the general population. The failure to do so will have consequences that “will be far reaching and will speak to generations to come,” Sika-Paotonu said.

There are a number of reasons behind the low vaccination rate for Maori, including a lower median age. Younger people were the last to become eligible to receive the Pfizer Inc.-BioNTech vaccine, which is currently only approved from the age of 12 in New Zealand.

But Tamihere said a cocktail of socio-economic factors and a deep distrust of government advice are also among the causes.

“Any knocks on the door that they get are from bailiffs, corrections, police, child services and welfare services,” he said. “Anything to do with the state is a bad experience.”

Ardern, whose Labour Party has pledged to champion Maori equality, had been reluctant to set a vaccination target precisely because she did not want to leave anyone behind.

She relented after calls for more clarity on the path toward re-opening, and insists the targets for health boards will ensure good vaccination rates “no matter who you are.”