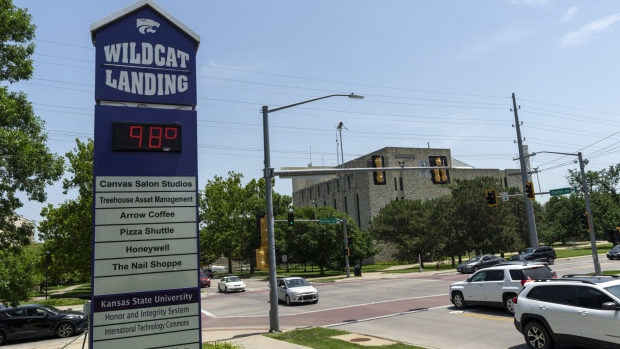 The temperature reads 98 degrees on Kansas State University signage in Manhattan, Kansas, US, on Friday, June 17, 2022. Cool and stormy weather at the corners of the US are helping trap heat across the Midwest and Mississippi Valley, where daily weather records are toppling as baking temperatures linger. , Bloomberg

(Bloomberg) -- Heat wave by heat wave, scientists have become confident in their ability to see the powerful influence of climate change behind unprecedented high temperatures in recent years.

A free online tool now estimates in real time the effects of greenhouse gases on US temperatures over the last 24 hours and up to two days in advance. The research nonprofit Climate Central, which is based in Princeton, New Jersey, began work on its new Climate Shift Index last summer, after several years of discussion among scientists that automated analysis should be possible.

“We wanted something that could make a statement about any temperature, ordinary temperatures, cool temperatures,” said Andrew Pershing, director of climate science at Climate Central.

The Climate Shift Index shows how a day’s high and low temperatures for any US location compare to its climate, pre-warming. The tool rates daily temperatures on a color-coded scale that ranges from -5 to 5. Positive numbers, 1 through 5, are the multiple by which climate change has made a given temperature more likely in a certain location on that day. Negative numbers denote cooler temperatures that are becoming more rare. For example, say a part of the country is experiencing cooler than average temperatures and is graded -3. That means it’s likely to experience that weather just 1/3 as often now.

Night is often cooler than the morning or afternoon, around the world, but it’s also warming faster than other times of the day. Nighttime heat can be dangerous because it prevents the body from sufficiently cooling off and recovering from the day. “Exceptional” low daily temperatures for Friday (at this writing on Wednesday) are now at least five times likelier than before climate change in parts of western Texas, southern New Mexico, central Louisiana and Florida. Parts of the country colored white on the map either fall within the range of the previous climate or are areas where the team’s results were inconsistent.

Sometimes winter masks extremely abnormal temperatures, such as in Wisconsin and Minnesota, which were unseasonably warm in December and ranked as fives on the CSI scale. This did not draw the same public attention as catastrophic summer heat waves.

Friederike Otto, a senior lecturer in climate science at Imperial College London, worked with Climate Central researchers on their methodology but not on the tool itself, Pershing said. Otto is the leader of World Weather Attribution, a project that analyzes extreme weather for climate signals within days or weeks of its occurrence.

WWA’s analyses tend to focus on how extreme weather exposes people to harm and leaves them more vulnerable. The research includes droughts, wildfires, storms and floods in addition to heat. That’s a level of analysis the automated Climate Central tool is unable to do. The CSI is purely a statistical tool that looks only at temperature values themselves. However, by providing rolling estimates of the climate impacts of US weather, the new tool may free up WWA and other analysts to work more on complicated weather elsewhere in regions that scientists have neglected in the past and that do not have weather data going back as far as the US or Europe.

“It’s very complementary to WWA’s work,” Otto said. “It’s about everyday weather, purely from a meteorological point of view,” to give people a sense of how climate change is touching their experience.

The Climate Central team uses three methods for analyzing the temperatures. Two of them rely on historical temperature data and how much a location has warmed relative to the global average of more than 1.1° Celsius. A third method simulates climate history in research models both as it occurred and without greenhouse-gas pollution, and compares the results to come up with an estimate.

The Climate Shift Index is expected to expand its coverage beyond the US in coming months.