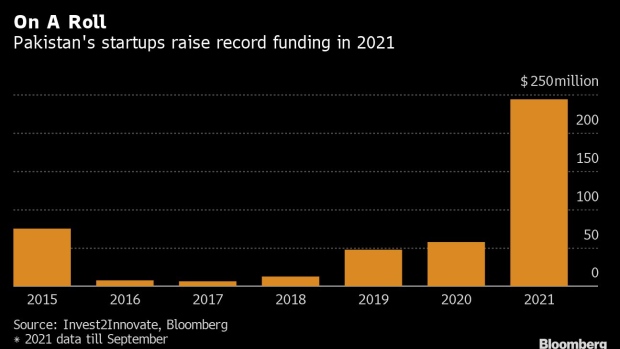 The Karachi-based startup raised the funding in a pre-seed round led by Indus Valley Capital. It also included Alter Global and Fatima Gobi Ventures.

Pakistan has one of the world’s largest youth markets, which is about half the size of its 230 million population. The startup, which is similar to India’s unicorn Byju’s, plans to target students through its mobile-only platform with after-school support at cheaper prices.

“The youth are using Snapchat and TikTok, so we’re leveraging very much on the tech techniques to make it super engaging,” said co-founder Rooshan Aziz, who left his job at BNP Paribas in London to start the venture. “We’re going to be tapping into their existing behaviors.”

Pakistan is seeing record investment in its startup industry with multiple venture capitalists investing for the first time. The country’s startups have raised more than $244 million so far this year. That’s more than the previous six years combined, according to data from venture capital fund, Invest2Innovate.

The Covid-19 pandemic has given a fillip to edtech startups globally, with ventures in countries such as India and Indonesia scaling rapidly to make education more accessible, said Aziz. Pakistan’s edtech opportunity is one of the largest in the world, according to Ali Mukhtar, general partner of Fatima Gobi Ventures.

Maqsad plans to launch its mobile app in the fourth quarter and will use the funds to build technology and content, and increase its workforce. The app will have features such as awarding points, rewards and badges to give a sense of accomplishment and keep up engagement, in addition to quizzes and other game-like features. Pakistan’s private sector spending on education, which was estimated to be about $6 billion in 2020, is expected to almost triple by 2030, according to Maqsad.

The startup’s founders Taha Ahmed and Aziz are high school friends who went to the London School of Economics and worked in the city before returning to Karachi a few months ago.

“Nothing was clicking and then Covid-19 happened and we saw the scale of online education in India, Indonesia and Jordan,” said Aziz.