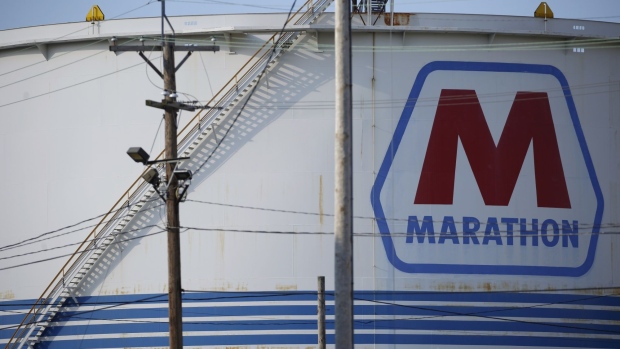 (Bloomberg) -- Marathon Petroleum Corp, the largest U.S. independent oil refiner, said it won’t restart two refineries in California and New Mexico amid concerns that demand for fuels are unlikely to return to pre-pandemic levels this year.

Marathon said in a statement it will convert its 166,000 barrel-a-day Martinez, California, refinery near San Francisco into a terminal facility and may add a renewable diesel plant to align with California’s Low Carbon Fuel Standards objectives and Marathon’s greenhouse gas-reduction targets. It will also close the 26,000 barrel-a-day Gallup refinery in New Mexico.

Both refineries were idled in April as Covid-19 decimated demand for refined products like gasoline and jet fuel. Marathon said May 5 during its first-quarter earnings call that Martinez and Gallup were targeted because they are the highest-cost facilities among its 16 refineries. It assumed product demand would improve enough to restart them before the end of the year. Subsequently, gasoline demand briefly improved after a slew of states attempted to reopen their economies around Memorial Day, then stalled as Covid-19 raged anew.

London consultancy Energy Aspects says there is too much global refining capacity and existing refineries will be pressured by new facilities coming online that can operate more efficiently, forcing some shutdowns of older sites. It projects global demand won’t return to pre-coronavirus levels until 2022.

“U.S. gasoline demand may never go back to normal,” Amrita Sen, chief oil analyst and co-founder of Energy Aspects, said in an interview., “Demand is trending low and, if anything, Covid is accelerating that.”

Martinez was also under pressure because California’s environmental regulations add to the cost of operating in its crowded refining market. “The situation in the West Coast market, which was already long refining capacity, has gotten exacerbated by the demand destruction caused by Covid 19,” Andy Lipow, president of Lipow Oil Associates in Houston, said in an interview.

Gasoline demand in California, the state with the most registered vehicles in the country, is about 60 percent of pre-Covid levels, according to California Fuels and Convenience Alliance.

Marathon, which acquired Martinez and Gallup 2018 when it bought rival Andeavor for $23.3 billion, might have been faced with high-cost refineries in its portfolio requiring expensive capital expenditures, Lipow said. “In the face of declining demand, it made more sense to shut them down.”

Gallup’s closure isn’t surprising, said Jon Sudduth, senior North American crude analyst for Energy Aspects in Houston. It is in a very small market and its source of regional crude production has been dwindling as drilling declined, which would have forced Marathon to find another, perhaps more expensive, supply, he said.

The company expects to begin a phased-out reduction of staff at the two refineries in October. Marathon will report second-quarter earnings on Monday.