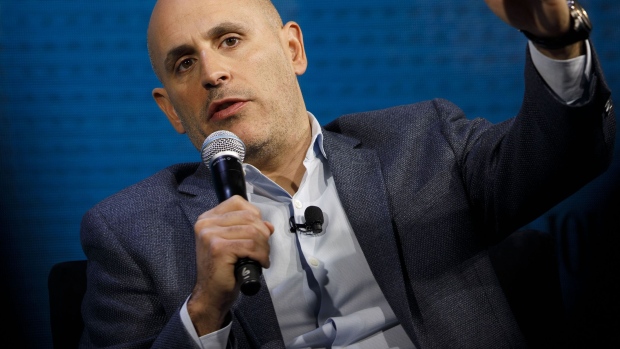 (Bloomberg) -- Since last year, several dozen purple-accented food trucks have been driving around suburban New Jersey, showing up at people’s houses to cook them food at their curb when beckoned through a smartphone application. The business that owns these trucks is a startup called Wonder, and it has used Westfield, an affluent town about 20 miles from Manhattan, as a testing ground for its brand of food delivery, recently spreading to a handful of neighboring communities.

Now, it’s planning a massive expansion, with hundreds of millions of dollars from investors, to go from 60 trucks today to more than 1,000 by the end of 2022.

Wonder’s founder and majority owner is Marc Lore, who founded Diapers.com and Jet.com, and who has a track record of launching ambitious projects. Lore started Jet.com with the intention to beat Amazon.com Inc. in a head-to-head competition (Jet.com was instead acquired by Walmart Inc. in 2016 for $3.3 billion), and his side hustle is a plan to build a 5-million person city operating under a new form of communalist capitalism from scratch. His goals for Wonder fit into the same audacious scale.

Already, the company has raised  an astonishing amount of money for a food truck business that currently covers a geographic area with about 17,000 households. Lore declined to comment on Wonder’s fundraising or finances, but two people familiar with the company say it has raised over $500 million from investors including NEA, Accel and Alphabet Inc.’s GV; one of them said that about $100 million of that is structured as debt that could be converted to equity.

Lore started Wonder in 2018 while he was an e-commerce executive at Walmart. He had his brother, Chad, take the lead at the company until Scott Hilton, who has worked with Lore since the Diapers.com days, took over as chief executive officer in 2019. Lore had been acting primarily as an advisor, but is now joining the company as the CEO and chairman of parent company Wonder Group, which will focus on building a business-to-business meal kit service and expanding internationally.

One of Wonder’s first moves was to strike deals with prominent restaurants, including Bobby Flay Steak and Nancy Silverton’s Pizzeria Mozza, or working directly with high-profile chefs like Marcus Samuelsson to develop Wonder-exclusive brands. Generally, delivery networks pitch restaurants on the chance to reach new customers, then earn money by taking a fee on each delivery.  Wonder, by contrast, pays restaurant owners and chefs a single fee for the exclusive right to act as the off-premise arms of their business. “The strategy here is really like Netflix,” Lore said. “We want to lock up the content — the chefs and restaurants — and continue to do that so that there’s really no opportunity for competitors to come in and have better content.”

Once Wonder has gotten a restaurant on board, its own chefs — it currently has about 60 on staff — work with the restaurants to create a version of the food that can be made quickly in the back of its mobile kitchens. The food is partially prepared in a centralized facility, a 40,000-square foot kitchen that Wonder refers to as its commissary. Then, a customized Mercedes Sprinter van, or “mobile kitchen,” is dedicated to each restaurant, staffed by a single employee who responds to orders made through Wonder’s app. The driver travels to the destination, parks at the curb, heats up the food in specialized ovens, and carries it to the customer’s front door. Wonder says its target delivery time is about 30 to 40 minutes.

In an attempt to train customers not to use competing delivery apps, Wonder simultaneously runs a DoorDash-like service called Envoy, which allows people to order food from local restaurants through the Wonder app, and employs full-time couriers to deliver it. These orders currently account for about 20% of Wonder’s volume, according to the company.

The idea of eating industrially-produced food designed to be quickly heated up in a vehicle may seem unappealing to anyone who’s ever taken a cross-country airline flight. But judging from posts on Facebook groups for residents in the Westfield area, customers have been pretty happy both with Wonder’s cuisine and its service. At the same time, the idea has also raised some concern from local officials, who are considering regulations for the company. “They’re not currently licensed in the town of Westfield,” said Lawrence Budnick, the president of the local board of health, according to an October report from local news website TAPinto Westfield. “They’re not currently inspected in the town of Westfield. They don’t pay fees to the town for the inspections.”

Budnick couldn’t be reached for further comment, and a representative for the board of health didn’t respond to an interview request. Lore said he was aware that Wonder’s business model could pose novel issues for local governments, and that the company is working with local officials. “It has been a collaborative effort and we appreciate their support,” he said in an email.

Wonder plans to focus its near-term expansion mostly on the suburbs of greater New York City, where Lore grew up. In the long term, Lore and Hilton say the business is structured to operate efficiently nationwide, setting up a handful of large commissaries that can serve multiple cities, with trucks having to make only periodic trips back to central facilities to stock up. Wonder’s model has the potential to be more profitable than the notoriously low-margin app-based delivery business, they said, because of this vertical integration.

“Marc is aware of the challenge of these businesses,” said Brittain Ladd, a consultant whose clients include companies in the delivery sector. Ladd, who has no direct relationship to Wonder, believes that it’s still early enough that there could be big rewards for a company that spends a lot of money the right way. “Where he made the right choice is he’s making new vehicles, re-evaluating the business, and trying to reimagine this whole experience,” Ladd said.

Wonder is not the first tech company to try to revolutionize eating with truck-based cooking. SoftBank Group Corp.-backed Zume Pizza was based on the idea that pizza could be fresher if cooked by robots in the back of the truck it was being delivered in, a vision it was unable to realize. There’s also plenty of competition in the world of delivery startups. For example, former Uber Technologies Inc. co-founder Travis Kalanick now runs CloudKitchens, a network of delivery- and pickup-only kitchens; several other companies are pursuing related ideas. But cloud kitchens aren’t much different than old-fashioned restaurants, according to Lore. “The food still has to be picked up by a DoorDash driver and delivered to someone’s house,” he said. “That’s what we’re solving for. The soggy fries.”