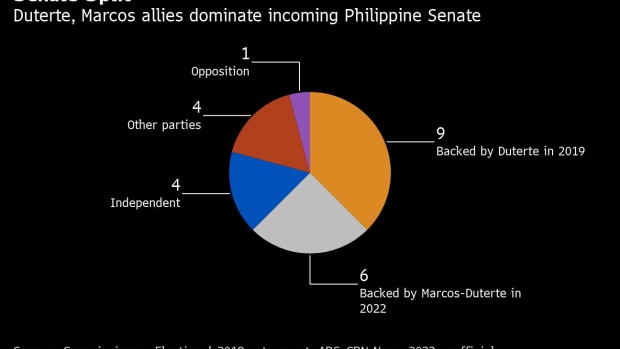 MANILA, PHILIPPINES - MAY 07: Ferdinand "Bongbong" Marcos Jr. speaks to supporters during his last campaign rally before the election on May 07, 2022 in Paranaque, Metro Manila, Philippines. Candidates for the May 9 presidential elections held their final campaign rallies two days before millions of Filipinos head to the polls to elect the country's new set of leaders. The son and namesake of ousted dictator Ferdinand Marcos Sr., who was accused and charged of amassing billions of dollars of ill-gotten wealth as well as committing tens of thousands of human rights abuses during his autocratic rule, has mounted a hugely popular campaign to return his family name to power. Ferdinand "Bongbong" Marcos Jr. enjoys a wide lead in opinion polls against his main rival, Vice President Leni Robredo, owing to a massive disinformation campaign that has effectively rebranded the Marcos dictatorship as a "golden age." Marcos is running alongside Davao city Mayor Sara Duterte, the daughter of outgoing President Rodrigo Duterte who is the subject of an international investigation for alleged human rights violations during his bloody war on drugs. (Photo by Ezra Acayan/Getty Images) , Photographer: Ezra Acayan/Getty Images AsiaPac

(Bloomberg) -- The Philippines’ presumptive president Ferdinand Marcos Jr. is poised to get more support from the legislature after his allies won half of the 12 Senate seats in last week’s elections.

The Commission on Elections issued a resolution on Wednesday declaring the new senators, led by Robin Padilla, an action star and a government neophyte who garnered the most votes in the race. Padilla ran under the ticket of Marcos and Sara Duterte, who led the vice-presidential race.

Five other winning senatorial candidates who ran under the Marcos-Duterte ticket, include former Public Works Secretary Mark Villar and returning Senators Loren Legarda, Juan Miguel Zubiri, Sherwin Gatchalian, and Jinggoy Estrada. The Philippine Senate has 24 members, with half elected every three years for a six-year term.

The election wins can give Marcos leeway to pass his priority bills in Congress. He has said he’ll push for a measure giving job security for contract workers, and has also backed suspension of an excise tax to tame oil price increase. Current economic managers in government are also hoping he’ll continue with tax reforms.

Three sets of blood relatives will be in the Senate in a country where powerful clans dominate politics: Estrada and Ejercito are siblings, Cayetano will join her sister, and Villar will join his mother -- both family members of billionaire Manuel Villar. Marcos’s sister Imee is also an incumbent senator.