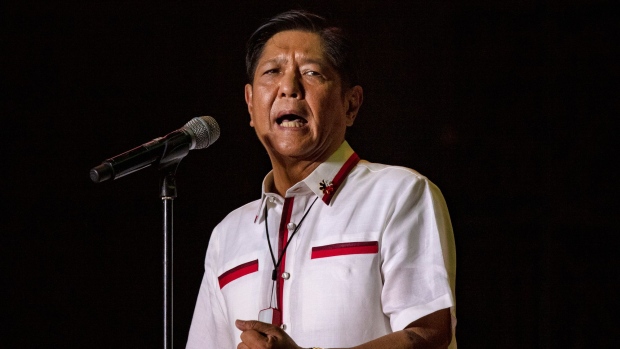 MANILA, PHILIPPINES - MAY 07: Ferdinand "Bongbong" Marcos Jr. speaks to supporters during his last campaign rally before the election on May 07, 2022 in Paranaque, Metro Manila, Philippines. Candidates for the May 9 presidential elections held their final campaign rallies two days before millions of Filipinos head to the polls to elect the country's new set of leaders. The son and namesake of ousted dictator Ferdinand Marcos Sr., who was accused and charged of amassing billions of dollars of ill-gotten wealth as well as committing tens of thousands of human rights abuses during his autocratic rule, has mounted a hugely popular campaign to return his family name to power. Ferdinand "Bongbong" Marcos Jr. enjoys a wide lead in opinion polls against his main rival, Vice President Leni Robredo, owing to a massive disinformation campaign that has effectively rebranded the Marcos dictatorship as a "golden age." Marcos is running alongside Davao city Mayor Sara Duterte, the daughter of outgoing President Rodrigo Duterte who is the subject of an international investigation for alleged human rights violations during his bloody war on drugs. (Photo by Ezra Acayan/Getty Images) , Photographer: Ezra Acayan/Getty Images AsiaPac

(Bloomberg) -- Philippine presumptive President Ferdinand “Bongbong” Marcos Jr. said he wants to boost trade ties with the US instead of a “dependence” on aid, and signaled openness to join an economic initiative pushed by President Joe Biden to counter China’s influence.

Marcos said he wants to attract more private investments and joint ventures from the US -- one of the Philippines’ top trading partners -- instead of relying on economic assistance. “Trade, not aid -- we always go back to that,” he said at a media briefing Monday.

He also said the Philippines under his watch will be “involved” with the US-led Indo-Pacific Economic Framework. “We have to open as much of the economy as we can to trade, and that’s where this kind of treaty will come in,” Marcos said.

The Southeast Asian nation has been a longtime ally for the US in the Asia-Pacific, but has moved closer to China during President Rodrigo Duterte’s administration. Marcos earlier said he would maintain the alliance with America, while seeking a deal with Beijing to settle the South China Sea territorial dispute.

Marcos said he discussed how to “redefine” the Philippines’ visiting forces agreement with America during his meeting on Monday with US Charge d’Affaires Heather Variava.

On the local front, Marcos said he plans to move some public spending to more investment-led expenditures “to revitalize and retool the economy.” He added he’s “always very wary of selling government assets” to raise revenue.

The Philippine economy outperformed expectations in the first quarter and grew at one of the fastest pace in the region. But the incoming administration faces a slew of challenges including the need to boost government revenue and pare down its mounting debt.

Marcos, who is the son of former dictator Ferdinand Marcos, said that he still needs a few more days to announce other cabinet members. Duterte named his finance chief immediately after his 2016 election win, but Aquino named Cabinet officials closer to his June 30 inauguration.

The government will study whether the nuclear power plant in Bataan province, which was built during his father’s term, can still be revived, Marcos said.