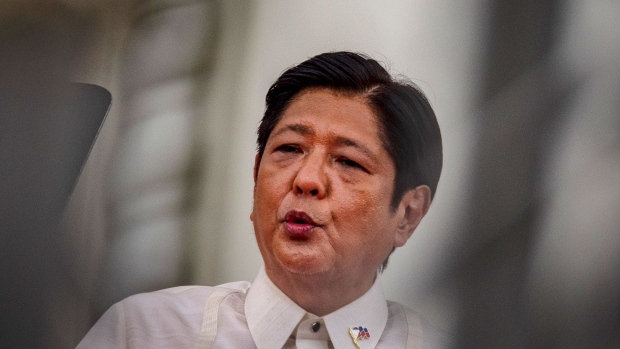 MANILA, PHILIPPINES - JUNE 30: Ferdinand "Bongbong" Marcos Jr. delivers a speech after taking his oath as the next President, at the National Museum of Fine Arts on June 30, 2022 in Manila, Philippines. Ferdinand "Bongbong" Marcos Jr. took his oath as the next Philippine President on Thursday, completing a once unthinkable political revival of his family 36 years after his dictator father, Ferdinand Marcos Sr., was ousted by millions of Filipinos in a people power revolution. (Photo by Ezra Acayan/Getty Images) , Photographer: Ezra Acayan/Getty Images AsiaPac

“What we are specifically talking about, targeting, is the inflation rate,” Marcos said at a briefing Tuesday, after his first Cabinet briefing. “We are not looking specifically at the exchange rate.”

Consumer-price gains surged 6.1% in June from a year earlier, well above the central bank’s 2%-4% target and is the fastest in 43 months, according to compiled data.

Bangko Sentral ng Pilipinas has so far raised borrowing costs by half a point this year to 2.5%, with its new Governor Felipe Medalla earlier on Tuesday signaling a rate increase of at least 100 basis points through 2022.

Inflation is mainly driven by rising costs of commodity imports, which is “beyond our control,” Marcos said.

The government must “make categorical differences” between imported and domestic price pressures, and it must ensure sufficient and affordable food supply in the next six months, he said.