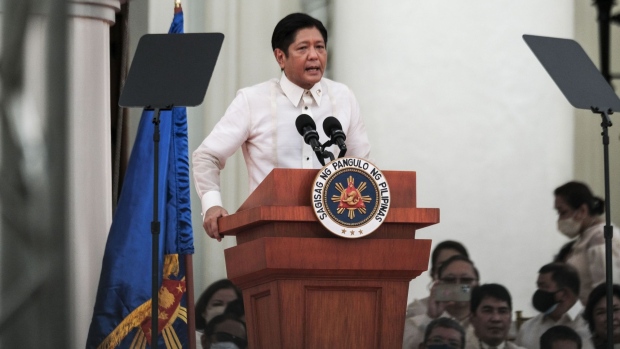 Ferdinand "BongBong" Marcos Jr., the Philippines' president, speaks during the swearing-in ceremony at the Old Legislative Building in Manila, the Philippines, on Thursday, June 30, 2022. Marcos won the presidency by a landslide with a campaign that promised unity and pandemic recovery, and which got a boost from social media posts positively portraying the dictatorship despite economic downturn and human rights violations at that time. Photographer: Veejay Villafranca/Bloomberg , Bloomberg

(Bloomberg) -- San Miguel Corp.’s airport project north of the Philippine capital will not be affected by President Ferdinand Marcos’s decision to veto a proposal for tax incentives in the gateway, his press secretary said.

Marcos supports the creation of an economic zone and freeport covering the airport, and the veto “was meant to cure the defects found in the measure,” Press Secretary Trixie Cruz-Angeles said in a statement Sunday.