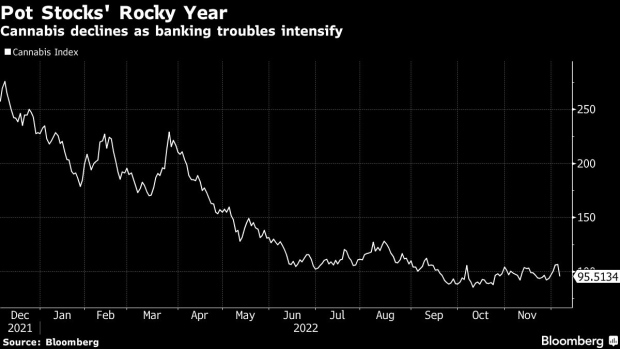 (Bloomberg) -- Marijuana stocks plunged after Senate Minority Leader Mitch McConnell criticized Democrats Tuesday for pushing to include measures to make it easier to buy pot in an end of year spending bill before Republicans take hold of the chamber.

The Cannabis Index, which includes major pot players like Canopy Growth Corp. and Tilray Brands Inc., fell as much as 10% on Tuesday, the most intraday in two months.

Many banks and credit card companies prohibit customers from purchasing cannabis through them while the drug is still federally outlawed. The SAFE Banking Act, which some Democrats have pushed to include in year-end legislation, would prohibit federal banking regulators from penalizing institutions that provide banking services to dispensaries.

READ MORE: Weed’s Workaround to the Banking System Is Getting Shut Down

McConnell said on the Senate floor Tuesday that the Democratic efforts to include “pet priorities” in the so-called defense bill would make the banking system “more sympathetic to illegal drugs.”

Cowen analyst Jaret Seiberg said they still see the banking bill as “likely to be added to the year-end omnibus,” even if its kept out of the defense bill.