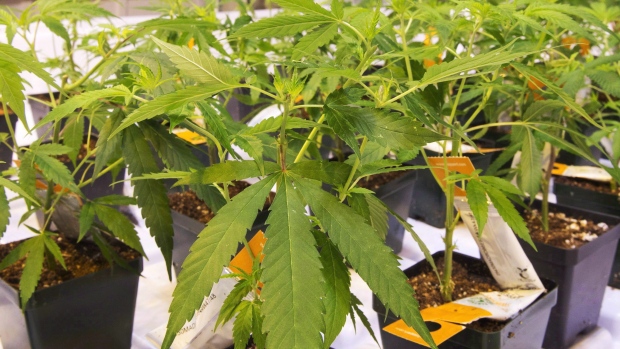 Cannabis seedlings are shown at the Aurora Cannabis facility in Montreal, November 24, 2017 , The Canadian Press/Ryan Remiorz

Turns out, it may be easier to strike gold by growing green.

Just ask Jay Wilgar, a former wind power developer who started a medical marijuana company with friend Travis Kanellos after hatching the idea while lifting weights at a gym. When they began looking at ways to take their startup public, advisers suggested partnering with Newstrike Resources Inc., a Toronto-based firm that had been looking for gold in Ontario and Wyoming without much luck.

“I think they had given up on what they were pursuing from a mining point of view,” Wilgar said by phone. He also wanted to work with “people that understand capital markets, and that was really how the Newstrike transaction came about.”

Newstrike, backed by The Tragically Hip, one of Canada’s most iconic bands, was reborn last year through a reverse takeover by Wilgar’s startup and has since shot higher. While the company has no revenue, it’s valued at C$612 million (US$467 million) and became a takeover target itself by rival producer CanniMed Therapeutics Inc. in November.

The number of companies that started in the mining or oil and gas sectors that are now part of Canada’s burgeoning marijuana industry has jumped to more than 40. In all, almost half of the country’s marijuana firms started out in the resource sector before many converted to pot via reverse takeovers and spinoffs.

The listings reflect a surge of investor optimism as Canada moves to legalize recreational pot this year. Market values for the four largest publicly-traded firms, Canopy Growth Corp., Aurora Cannabis Inc., Aphria Inc. and MedReleaf Corp., have all ballooned to more than C$1 billion. The pot companies on Canadian exchanges have a combined market value of about C$32 billion.

While the surge is being fueled by estimates that retail sales of recreational and medical pot could reach C$8 billion by 2021, there’s mounting concern companies are overvalued. It remains unclear how Canada will set prices for marijuana and some publicly traded growers have yet to make a sale.

Marijuana stocks plunged in January following a rally at the end of last year that saw Aurora Cannabis more than triple, while Canopy Growth and Aphria more than doubled. Stocks began to look “overvalued and overbought,” according to a Jan. 31 note from the BCMI Cannabis Report. The BI Canada Cannabis Index has tumbled 18 percent this year.

"Every hot equity cycle tends to create a pile-on effect,” Jason Zandberg, an analyst at PI Financial in Vancouver, said in an email. “Individuals will enter a hot new space looking to capitalize on a growing demand, in this case legalized cannabis.”

The reverse takeovers allow investors to quickly tap into this new space, giving Canadian entrepreneurs and exchanges a leg up on global rivals as legalization of pot spreads around the world.

Many new entrants go public via a reverse takeover and use the old mining or oil and gas “shells” as the listing vehicle, Zandberg said. It’s a potentially faster way to list on a public exchange, and unlike a traditional initial public offering, companies don’t have to undergo a full securities commission review or file a prospectus.

There are plenty of failed mining exploration companies that are sitting on Canadian exchanges paying fees and doing annual audits that still have “shell value,” said Canadian Securities Exchange Chief Executive Officer Richard Carleton. While that’s something that U.S. Securities Commission has cracked down on to avoid fraudulent pump-and-dump schemes on the Nasdaq and New York Stock Exchanges, Canadian exchanges demand that companies present a viable plan to sustain their operations and undergo a thorough review, he said.

Still, there are signs Canadian exchanges could lose their first-mover advantage to bigger U.S. peers. Toronto-based Cronos Group Inc. became the first cannabis stock to list on the Nasdaq Stock Market last month. Other producers, including Canopy Growth and Aurora, say they plan to follow suit, which could shift some trading to the U.S. from Canada.

Canada’s venture markets are known for their risk appetite due to its listing rules and the nation has always been a “mining frontier country,” said Chris Damas, editor of the BCMI Cannabis Report. No one can say for certain how much marijuana will be consumed when recreational sales become legal, and there are some small investors jumping into the market with a “gambling chip and they don’t really read the fine print” in company disclosure statements, he said.

“It’s like a Yukon gold rush,” Damas said. “It’s always been part of our DNA.”