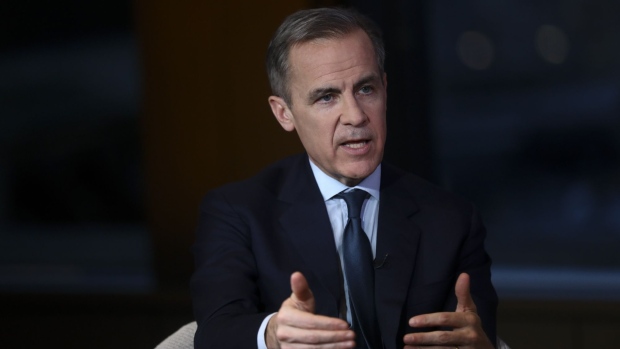 (Bloomberg) -- Mark Carney, the former Bank of England governor, said Russia’s war on Ukraine and a deepening energy crisis will lead to a near-term increase in the financing of fossil fuels and a rise in greenhouse gas emissions.The comments by Carney, who is now vice chair of Brookfield Asset Management and the co-chair of a global alliance that’s promised to end financed emissions, show that efforts to fight climate change are being complicated as geopolitical turmoil sets the agenda for capital flows.“One of the things that's going to happen is that because of Russia's unjustified invasion and the response to that, there is going to be more investment in fossil fuels and financing of fossil fuels in the near term," Carney said in an interview Thursday from the International Monetary Fund’s spring meeting in Washington. “Near-term there's more emissions; this situation makes the job harder.”

Banks have so far been reluctant to acknowledge they’ll need to shelve their near-term climate goals in response to the war. Putin’s belligerence has turned Russia into an international pariah, with the West urgently trying to wean itself off the country’s oil, gas and coal. That’s put pressure on other producers to ratchet up supplies, in a development that threatens to raise emissions at the worst possible time for the climate. The United Nations Intergovernmental Panel on Climate Change recently issued a stark alert that the world's emissions must peak immediately to have a shot at keeping the temperature from rising more than 1.5° Celsius.

It’s been a year since Carney unveiled the Glasgow Financial Alliance for Net Zero, a coalition of the biggest names in banking, investing and insurance that’s pledged to eliminate portfolio emissions. Over that same period, banks have provided more than $600 billion in capital to oil, coal and gas producers, roughly unchanged from the previous year, according to Bloomberg data. And major asset managers still hold about $550 billion in fossil-fuel developers, an analysis by Reclaim Finance shows.Those figures don’t capture the full picture of the transition work that’s under way, according to Carney. But he also said that capital flows into renewable energy remain well below where they need to be. “The brutal reality” is that financing for clean energy sources is only one-third of the level it needs to reach, he said.Convened by the United Nations, GFANZ comprises seven groups spanning all corners of the financial industry. Signatories representing a combined $130 trillion in assets must commit to use science-based guidelines to document their path toward net-zero carbon emissions, and to provide 2030 interim goals. Michael R. Bloomberg, the owner and founder of Bloomberg News parent Bloomberg LP, has been co-chair of GFANZ together with Carney since November.The disconnect between the proliferation of net-zero pledges and the continued flow of cash into fossil-fuel producers last month prompted UN Secretary-General Antonio Guterres to appoint an expert group to police the net-zero movement. And the Science Based Targets initiative is now planning to withhold net-zero certification from banks and asset managers that don’t meet deadlines to cut the flow of capital to fossil-fuel production.