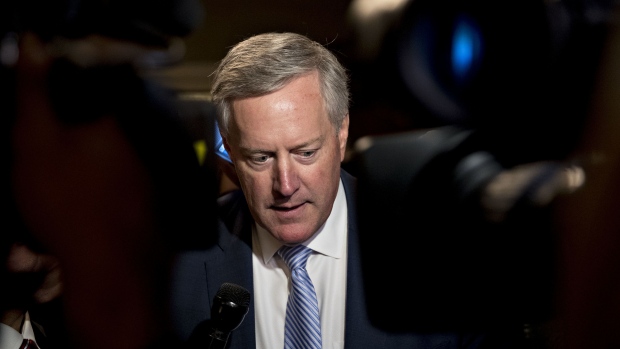 Representative Mark Meadows, a Republican from North Carolina, speaks to members of the media after a GOP leadership election on Capitol Hill in Washington, D.C., U.S., on Wednesday, Nov. 14, 2018. House Republicans elected Representative Kevin McCarthy of California as their leader next year, with Steve Scalise of Louisiana and Liz Cheney of Wyomingfilling two other top party leadership posts as the GOP retreats to minority status in the chamber. , Bloomberg

Meadows, who is among those instructed by Trump lawyers to defy congressional subpoenas, has already turned over some records and engaged with the committee through his lawyer, forestalling any potential contempt of Congress action.

“He has produced records to the committee and will soon appear for an initial deposition. The Select Committee expects all witnesses, including Mr. Meadows, to provide all information requested and that the Select Committee is lawfully entitled to receive,” Mississippi Democrat Bennie Thompson, the panel’s chairman, said. “The Committee will continue to assess his degree of compliance with our subpoena after the deposition.”

Meadows’ lawyer, George Terwilliger, did not immediately respond to an email requesting comment.

Thompson and the committee’s Republican vice chair, Liz Cheney of Wyoming, had warned Meadows, a former Republican congressman, publicly in early November that the committee would consider contempt action against him after he failed to show up for a scheduled deposition.

The news comes as the Jan. 6 panel of seven Democrats and two Republicans has set a Wednesday vote on whether to recommend the House whole in contempt of Congress ex-Justice Department official Jeffrey Clark for his lack of cooperation under subpoena.

Majority Leader Steny Hoyer said Tuesday a contempt vote by the full House that referring the matter to the Justice Department for prosecution could occur later this week.

In October, the House took contempt action against Steve Bannon, who served as Trump’s chief political strategist and helped run his 2016 campaign. With the committee’s recommendation, Democrats who control the House voted to hold Bannon in criminal contempt of Congress for his defiance and referred the matter to the Justice Department for prosecution.

A federal grand jury indicted him on two counts of contempt of Congress this month.