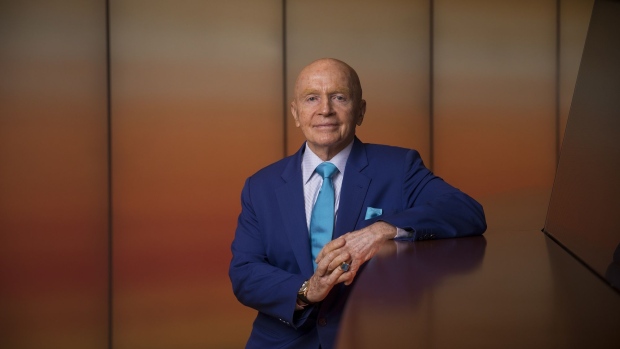 Mark Mobius, co-founder of Mobius Capital Partners, poses for a photograph following a Bloomberg Television interview in London, U.K., on Wednesday, May 15, 2019. The emerging-market benchmark index will probably keep falling if the trade war persists, given China's significant weighting, Mobius said during the interview. , Bloomberg

(Bloomberg) -- The veteran emerging-market investor Mark Mobius is warning that a storm is coming for Brazil stocks as the country grapples with higher global interest rates and political volatility ahead of presidential elections.

“The outlook for Brazil is somewhat cloudy,” said Mobius, who left Franklin Templeton Investments in 2018 to set up Mobius Capital Partners. Known by his usual bullishness on developing-nation markets, Mobius has a history of correctly calling the rebound for Brazil’s stock market, most recently in late 2020, after domestic assets were crushed by the pandemic. But this time, higher borrowing costs and an uncertain political environment have “storm clouds appearing,” with the risks potentially offsetting depressed valuations in Brazil’s stock market.

Brazilian stocks are trying to bounce back following a dismal year that saw them post their first annual decline since 2015, making the Ibovespa the world’s second-worst-performing equity benchmark. While depressed multiples already embed part of the bad news, there might be room for further pressure as policy makers -- inside and outside Brazil -- move to reverse their monetary policy, according to Mobius.

“To some degree many of those variables have been factored in and we have seen some market recovery,” Mobius told Bloomberg News. But if headwinds persist, “it will be a difficult market environment,” he said in an interview.

Leftist former President Luiz Inacio Lula da Silva, who has been leading opinion polls so far, is expected to win the presidential election scheduled for next October, according to Mobius. He’s poised to face opponents including incumbent President Jair Bolsonaro and former Judge Sergio Moro.

“It would be dangerous to assume that a Lula election would be bad for the market,” he said, noting that Brazilian assets did well after the Workers’ Party candidate was elected for the first time in 2002, following a period of “hesitation and fear” by investors.

Lula could be good for the market, Mobius said, but comments from people close to him on a big spending program “could spell problems in terms of higher debt and high taxes” ahead. In a recent interview with Bloomberg News, a close economic adviser to Lula said that Brazil will have to boost spending in 2023 to fight poverty and unemployment.

“If we assume an election of Lula, then we need to expect bigger government bureaucracy and spending,” Mobius said. That “initially could give a boost to the economy but longer term would not be good.”