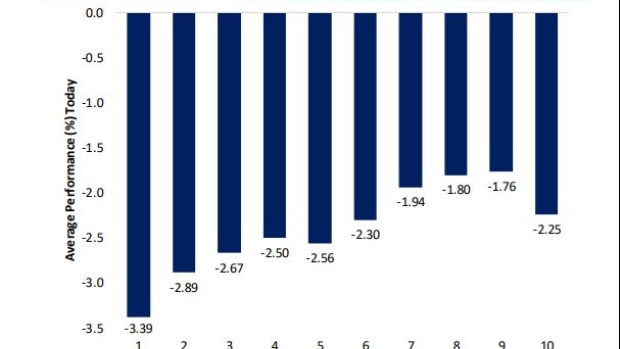 (Bloomberg) -- U.S. stocks had their worst day in months on Monday and lots of fingers pointed to angst over China Evergrande Group’s debt crisis. Had the Chinese property developer been the sole cause of the rout, reasoning holds that more heavily indebted companies should have faced the brunt of the selling.

Instead, the opposite happened, Bespoke Investment Group wrote in a note.

The stocks that fell the most during Monday’s downturn were those with the lowest leverage ratios, meaning those with less debt and higher assets, according to the firm’s global macro strategist.

Bespoke broke down the Russell 3000 into deciles sorted by debt-to-asset ratios. “Moving across deciles, performance generally improved as the debt-to-asset ratio moves higher,” according to Bespoke. The 10th decile -- one of the most highly levered firms, going by that measure -- stood out with slightly worse performance “but not dramatically so.”

The S&P 500 on Monday suffered its worst drop since May as concern grew over China’s real-estate sector and Evergrande’s ability to service its debt. Many assets unrelated to China or its property sector were swept up in the drawdown, with companies like Twitter Inc. and Kroger Co. that have little ties to the country also dropping.

“The proximate cause of the selloff yesterday was China Evergrande -- it was a global selloff, clearly,” David Donabedian, chief investment officer of CIBC Private Wealth Management, said by phone. “But then I think more broadly it also fed into a narrative of slowing global growth -- in China, in the U.S., and in general. That’s been on the mind of investors lately.”