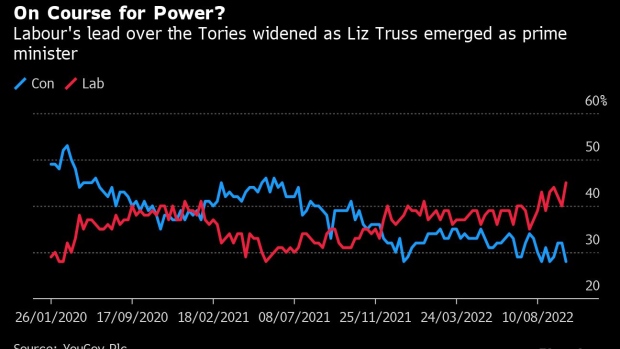 (Bloomberg) -- As the pound tumbled in the currency market, the political fortunes of one man were heading the other way.

Labour leader Keir Starmer was in Liverpool, northwest England, for the party’s annual conference, and there was a shift in the mood as investors continued to deliver their judgment on UK Prime Minister Liz Truss’s plan for the economy. After failing to win an election since 2005, the stars may be aligning to see the biggest opposition party on the path to power.

Rather than the infighting that’s dogged Labour at recent conferences, senior party figures behind the scenes were talking of an outright majority at the next general election expected in 2024. Businesses, too, were taking note. While Chancellor of the Exchequer Kwasi Kwarteng gathered top City financiers at the Treasury to explain the government’s lambasted fiscal package, company executives and lobbyists flocked to Liverpool.

“There’s a real change in the journey Labour has been on,” Tina McKenzie, chair of policy and advocacy at the Federation of Small Businesses, said at a fringe event on Monday evening.

Whether that journey ends in government is still unsure, and the risk is that the buoyancy wanes in coming months. The 60-year-old leader has been under pressure from party insiders to come up with some policies that can resonate with the public and ensure Labour doesn’t squander the political opportunity with the UK in such disarray.

Indeed, some inside the party conceded that Labour’s soaring ratings — a YouGov poll on Tuesday gave the party a 17 percentage-point lead over the Conservatives — had more to do with the government’s plummeting popularity rather than a rush of support for Starmer.

The UK’s stock and bond markets have lost at least $500 billion in combined value since Truss took over as prime minister three weeks ago, with investor confidence hammered by fiscal plans that favored mass borrowing to hand out tax cuts to the rich.

That has allowed Labour to portray itself as the party of fiscal responsibility, a departure from the traditional tropes of British politics. With that backdrop, Starmer chose to focus his keynote speech on Tuesday on careful stewardship of the economy and prioritizing working people. And unlike the occasional heckle last year, it was all ovations and standing room only.

“We need to be prepared, disciplined, focused — spend each day working to earn the trust of the British people, provide the leadership this country so desperately needs,” Starmer said. “Because as in 1945, 1964, 1997, this is a Labour moment.”

Seat-by-seat analysis in a Savanta Comres poll released during the conference suggested Labour is on course for a 56-seat majority. Still, there is far more to be done to convince the public that the party is ready for government, Starmer allies said.

Closer to the next election, the Labour leader plans to relaunch the party under a slogan with the idea of a new beginning. Party strategists are also working on clearer, catchy messaging to make sure people understand what Labour stands for — work that is seen as crucial in winning over wavering voters.

For now, this conference, which concludes on Wednesday, was about exuding authority and competence rather than setting out a detailed policy vision. Last year, former Prime Minister Boris Johnson was leading in the polls even as the country was in chaos due to a trucker shortage. The party was privately talking about Starmer’s leadership being a “two-term project,” with very little chance of him taking power before 2025 — and that’s if he remained leader.

A spiral of scandals then led to Johnson’s downfall, Truss emerging as his replacement — and a political gift to Labour, according to some in Starmer’s team. The aim now is to portray Labour as a grown-up, patriotic, government-in-waiting. The gathering began on Sunday with the party singing the national anthem for the first time, in the wake of Queen Elizabeth II's death.

Memories of the late 1990s loomed large, with many likening the buzz around the party to that around Tony Blair just before he took power in 1997 after a long Conservative reign. But there were also fears that the next election could be a rerun of five years earlier, when leader Neil Kinnock was tipped for victory only to lose as the Conservatives won a fourth straight term.

That Starmer could even contemplate winning a Labour majority marks the sea change in the party’s prospects since he took over in the wake of the 2019 election defeat, Labour’s worst since 1935. No party has ever bounced back from such a loss to win power the next time around.

With politics at its most volatile, senior Labour figures underlined that there was still a long way to go, not least because the electoral math — as well as history — is stacked against the party.

Labour needs to not only claw back the so-called Red Wall districts in northern England they lost to the Tories last time round — the low-hanging fruit, according to pollsters — but many more seats across the Midlands and south that the Conservatives have held since the early 2010s.

The ongoing dominance of the Scottish National Party in Scotland makes the task even more daunting, despite hopes some SNP voters could shift to Labour if they believe they have a credible chance of governing. Starmer on Tuesday again ruled out any deal with the nationalists, whose leader Nicola Sturgeon is pushing for another independence referendum.

Yet even if the party falls short of a majority, it could still win power as a minority government with the support of the Liberal Democrats.

Complacency, though, is seen as the enemy in Labour’s top circle. People want more evidence before they switch their vote, one of Starmer’s would-be ministerial team said, and they will need to see a comprehensive set of policies soon.

Labour member Jawad Khan, 24, a charity worker from West Yorkshire, echoed that view as he stood with friends after Starmer’s speech. “We still need that clear message,” he said. “Voters want substance, and I don’t think we’re there yet.”