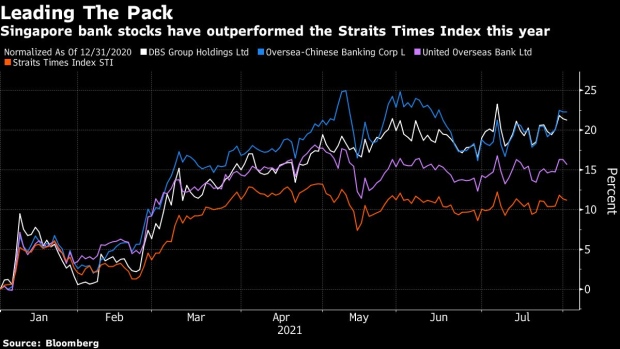 (Bloomberg) -- The fate of Singapore’s bank stock rally is seen hinging on what the lenders plan to pay out to investors from their earnings after the central bank lifted restrictions on dividends.

The Monetary Authority of Singapore’s decision to end caps on lenders’ dividends just a few days ahead of the quarterly earnings season may act as a positive catalyst for sector socks, according to analysts. Banks are among top gainers on the Straits Times Index this year, with the biggest names rising by an average of 20% on bets that rising bond yields will aid their earnings.

“We had expected caps to be lifted in phases, Jefferies analyst Krishna Guha wrote in a July 29 note. “As such, complete reinstatement is a positive surprise,” he said, noting that investors should also monitor the outlook for loan growth and write-back of provisions for bad loans.

While the lenders are expected to report a second straight quarter of profit growth, analysts expect some level of slowdown after the exceptional performance last quarter. Payouts from the three largest Singaporean banks may remain flat through 2021 and recover to pre-pandemic level in 2022, according to Bloomberg’s dividend-forecasting model.

Bloomberg Intelligence analyst Rena Kwok said the possibility of write-backs looks more interesting after the lifting of the dividend cap, as an affirmation of Singapore lenders’ financial resilience.

DBS may lead, as it had already written back S$190 million ($140 million) in the first quarter, followed by OCBC given its greater exposure to North Asia where a stronger recovery is underway, Kwok said. UOB may adopt a more prudent approach due to its exposure to Southeast Asia, which has seen a resurgence of virus infections, she added.

Earnings estimates based on average estimate of five analysts surveyed by Bloomberg: