The wild ride investors had once grown accustomed to in the pot sector is now back.

After a rally on Friday and early this week, cannabis stocks have see-sawed as mixed earnings results from some of the sector’s biggest companies offset optimism that a Joe Biden presidency will be favorable to the industry.

A measure of 10-day volatility on the ETFMG Alternative Harvest exchange-traded fund, commonly known as MJ, has hit its highest level since the pandemic-driven market rout earlier this year. Prior to that, the last time the ETF was as volatile was in 2018. 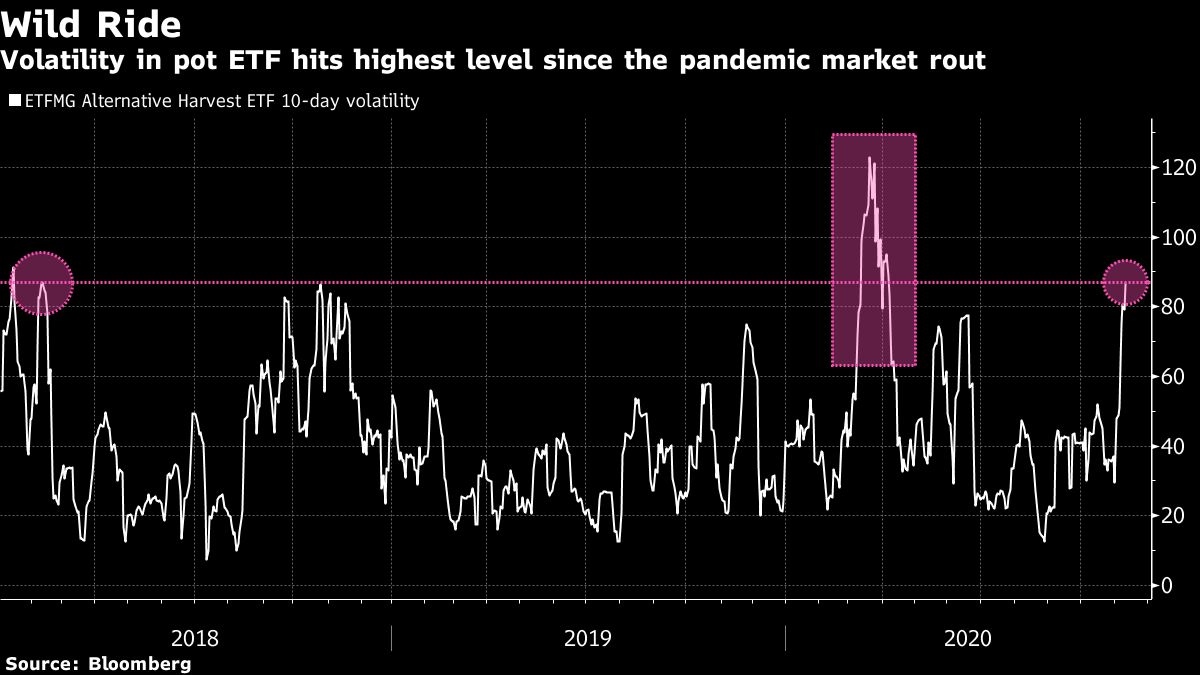 Both Aurora and Tilray’s shares have “meaningfully outperformed” amid investor enthusiasm around the potential for U.S. federal reform, Stifel analyst W. Andrew Carter said in a report and downgraded both companies to a sell rating from hold.

Aurora’s third-quarter results signaled a sense of urgency when it came to its cash needs, especially after announcing a US$125 million offering last night, Carter said. He pointed to similar concerns for Tilray.

Prior to this, pot stocks had surged for three days as Aurora Cannabis Inc. and Canopy Growth Corp. reported quarterly sales that beat expectations and ballot passages in Arizona, Mississippi, Montana, New Jersey, and South Dakota, which now add to the 44 states that allow marijuana for medical or recreational purposes.

“Investors are likely misreading the situation and feeling overly confident in cannabis’ near- to medium-term prospects,” said Beacon Policy Advisors. “A Biden win does not guarantee federal legalization, which could be more closely at hand if Democrats also win control of the Senate.”

--With assistance from Bailey Lipschultz, Janet Freund and Felice Maranz.