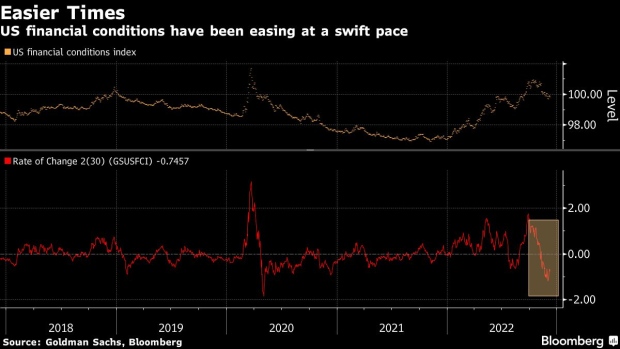 (Bloomberg) -- The steady drumbeat of warnings that the American economy is careening toward a recession finally struck a nerve on Wall Street.

Investors who had tuned out warnings for the past two months — from the most inverted Treasury yield curve in four decades to a wipeout for 2022’s heady oil price gains — began trading as if the biggest threat to risk assets was now a looming downturn in growth.

Cyclical stocks led the S&P 500 to a 3.4% drop in the week after the equity benchmark failed to hold above its average price for the past 200 days. While optimism that the Fed would slow the pace of rate increases had stoked a 14% rally since mid-October, investor moods have now darkened with worries that such a move, when it does come, will be the mark of an economy laid low.

Already signs are emerging that the growth is buckling under the Fed’s aggressive tightening. The US services sector contracted last month. Although the labor market remains sturdy, some weakness has appeared, most recently in another rise in continuing claims for jobless benefits. At the same time, inflation may have peaked but it’s still elevated enough to keep the Fed vigilant, raising the risk it will overtighten.

“We will shift from seeing ‘bad data’ as being ‘good’ to bad data being bad because it is a signal the economy is weakening faster and worse than most expected,” said Peter Tchir, head of macro strategy at Academy Securities.

Markets have started trading the stream of gloomy economic news as bad, rather than a reason to rally on the prospect for easier Fed policy. At the same time, inflation remains elevated — evidenced by an unexpectedly rapid rise in producer prices last month — and the central bank will render its final policy verdict of the year Wednesday. Taken together, it was enough to squash the fall rally.

Since equities peaked on the final day of November, energy shares have led the retreat, a departure from all three previous selloffs of 2022 when raging inflation spurred demand for materials producers. Companies that are more sensitive to the economy, like financial firms and makers of consumer products, are among the laggards in December.

The shift in narrative is also obvious in fixed income. Earlier in 2022 when the inflation scare was raging, bonds tumbled in each of the three instances when the S&P 500 fell at least 10% from a peak. Now bonds have begun to reclaim their place as a recession hedge. On Wednesday, a rally in long-dated debt pulled 30-year yields below 3.5%, a level last seen in September. The iShares 20+ Year Treasury Bond exchange-traded fund (ticker TLT) has climbed 9% in the last three weeks.

The message was endorsed at the highest echelons of Wall Street in recent days, where bank chiefs had a uniformly grim outlook for slowing growth and corporate earnings. Even sellside analysts, predisposed to talk up assets they sell, have been sounding notably downbeat, predicting a decline in 2023. The average projection of strategists tracked by Bloomberg is for the S&P 500 to end next year at just 4,009 — their most pessimistic call since at least 1999.

Positioning and trading patterns also showed a shift away from risk assets. Investors exited global stocks at the fastest pace in five months, dumping $35 billion in the last three weeks after they’d amassed $23 billion just a week earlier, according to EPFR data. Signals in the breadth of moves also reinforced the fleeting nature of recent gains, mirroring conditions that presaged the end of rallies in March and August.

Technical levels that had spurred buying in November buckled in the week. The S&P 500 failed to hold above its 200-day moving average and then slid through a retracement level that had given succor to bulls.

What complicates things further is that the November’s equity rally has triggered the fastest easing in financial conditions since March 2020, according to a Goldman Sachs Group Inc. gauge, casting doubts on the Fed’s ability to switch to looser policy starting next year.

Fed policymakers appear determined to see their tightening campaign through to peak of about 5%, after being caught out by the intensity and staying power of price pressures. That’s bad news for an economy that looks set to contract at some point next year.

“There’s a lot more pain that has to come through,” said Justin Burgin, director of equity research at Ameriprise Financial. “We’ve barely seen the lag effect of the fastest rate hike in history.”