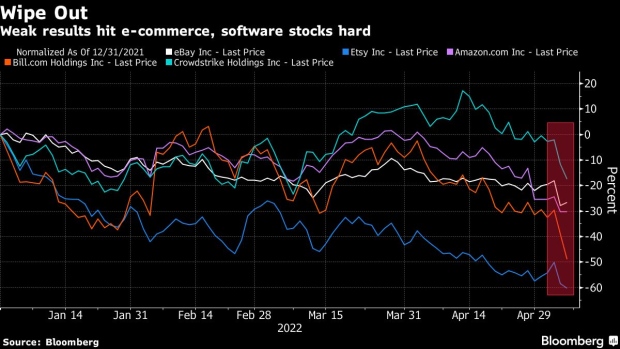 (Bloomberg) -- It’s been a volatile week for U.S. stocks. The selling, then buying, then major selling -- followed by even more selling -- sent indexes back to levels last seen a year ago when the pandemic was still rampaging.

But few groups were punished as harshly as the companies that missed their quarterly earnings expectations.

In normal times, companies that report worse than anticipated results can expect to suffer modest drops as Wall Street digs into the underlying business. In the current environment, however, underwhelming earnings are being slammed with massive selloffs as traders dump shares of former market darlings.

Take Under Armour Inc., for example. The stock plunged by as much as 27% on Friday after warning it’s struggling with supply-chain issues. Lyft Inc., which spiraled to the lowest since Covid-19 ravaged markets in March 2020, shed more than one-third of its value this week after the company spooked investors by saying it plans to spend more money to woo drivers.

The struggle was real in Europe too, where Adidas AG sank despite earnings that “would have been seen as almost reassuring,” according to Jefferies, which called the current macro environment “not a normal market.”

The likes of Amazon.com Inc. and software and e-commerce peers including CrowdStrike Holdings Inc. and Etsy Inc. were also whipsawed as investors dumped growth stocks.

To be fair, it wasn’t much better for companies that actually beat expectations: Expedia Group Inc. and Airbnb Inc. saw initial rallies turn into selloffs despite results and guidance that showcased increasing demand for travel.

Adam Crisafulli, founder at Vital Knowledge, attributed the high volatility and relentless selling to secular shifts similar to what happened in the 1990s, when excessive optimism related to the Internet created a bubble, as well as soaring inflation.

“In this vortex of change, everyone has become discombobulated,” he wrote. “The result is a [market] tape in which no one is really happy, and barely anyone has any conviction about what comes next.”

This kind of gloom is everywhere as the week comes to a close, unless of course you’re a fan big oil or big dividends.

The S&P 500 Energy Index rallied more than 10% this week, while the Vanguard High Dividend Yield ETF, ticker VYM, was up a more modest 1.9%. Kellogg Co., a notable dividend payer, climbed more than 6% this week to the highest level since 2018.

Many of the S&P 500’s top performers during the market’s latest leg lower include Devon Energy Corp., Pioneer Natural Resources Co. and Occidental Petroleum Corp. The group’s standout performance is a product of oil trading back above $110 a barrel despite an earnings season for energy companies that has actually underwhelmed.