“The markets are wrong” about inflation expectations, said Sicilia, chief investment officer of the A$56 billion (US$43 billion) Host-Plus Pty pension fund in Melbourne. “Deflationary forces are bigger. Interest rates are going to stay at effectively zero.”

With governments around the globe still adding to trillions of dollars of stimulus to ride out the pandemic, pension fund managers who are trying to discern the long-term effects are posing the question: Will inflation make a comeback? If it does, more than US$46 trillion of global pension assets would be affected as central banks pivoted toward sustained higher interest rates. 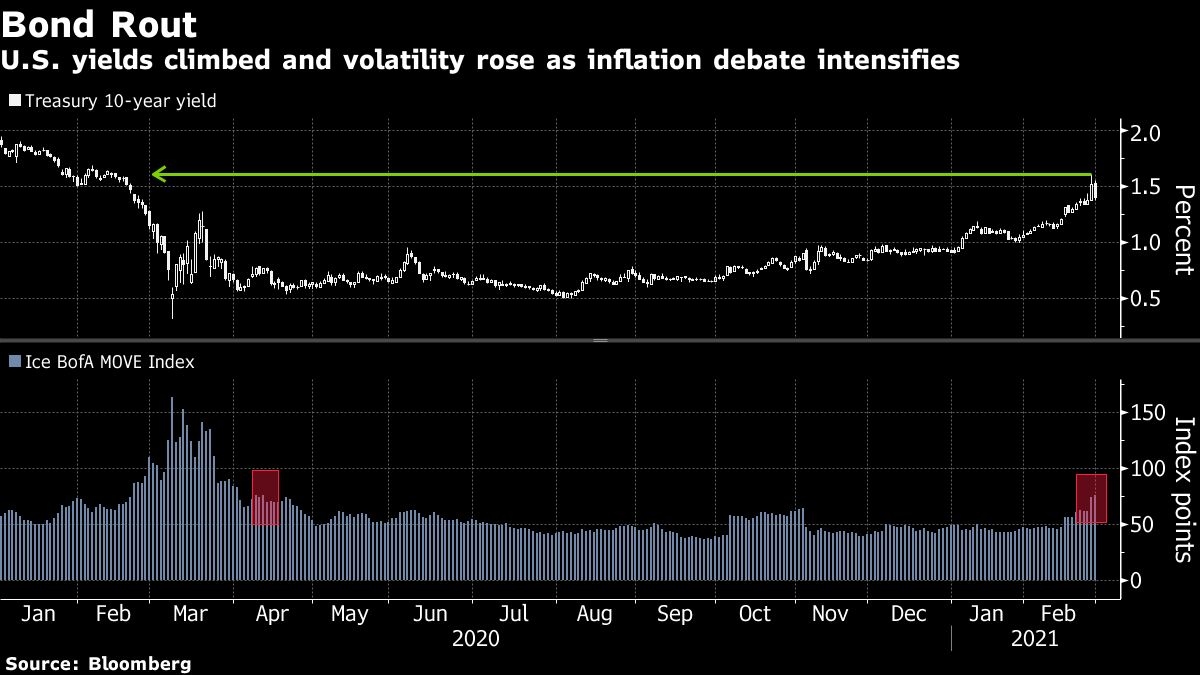 Interviews with five pension funds that help oversee parts of Australia’s A$2.9 trillion (US$2.3 trillion) in retirement assets reveal a rank of investors largely unconcerned about the risk of rising prices.

Last week, bond trades triggered speculation that inflation may accelerate to multi-year highs as the inevitable conclusion to the world’s US$19.5 trillion coronavirus rescue package. Yields on 10-year Treasuries surged to pre-pandemic levels on Thursday, convulsing markets from stocks to credit as traders bet on more aggressive tightening -- with a U.S. interest rate hike briefly priced in for late 2022, at least a year earlier than the Federal Reserve had signaled.

“I don’t think they would want to risk any recovery” by allowing markets to tighten too quickly, said Michael Clavin head of fixed-income at the A$140 billion Aware Super, Australia’s second-biggest pension fund by assets. There may be a “burst of inflationary data, but we’re not really sure it’s sustainable.”

Like Sicilia, Clavin points to technology advancements as the biggest damper on long-term price growth.

Economists have struggled for years to quantify technology’s deflationary impact on everything from supply chains to wage growth -- Clavin’s wind vane for price pressures -- but the overall effect has been to stifle price increases. And that’s not including the increased unemployment from the pandemic.

“There’s still quite a big hurdle to get the jobs back that were lost,” Clavin said. “I don’t see how you’re going to overcome those deflationary forces without some sort of wage growth.”

Aware is sticking to a strategy that includes being overweight in global equities and cash in its default option to ride out the market volatility. It also invests about 15.6 per cent of its default fund in fixed-income assets. 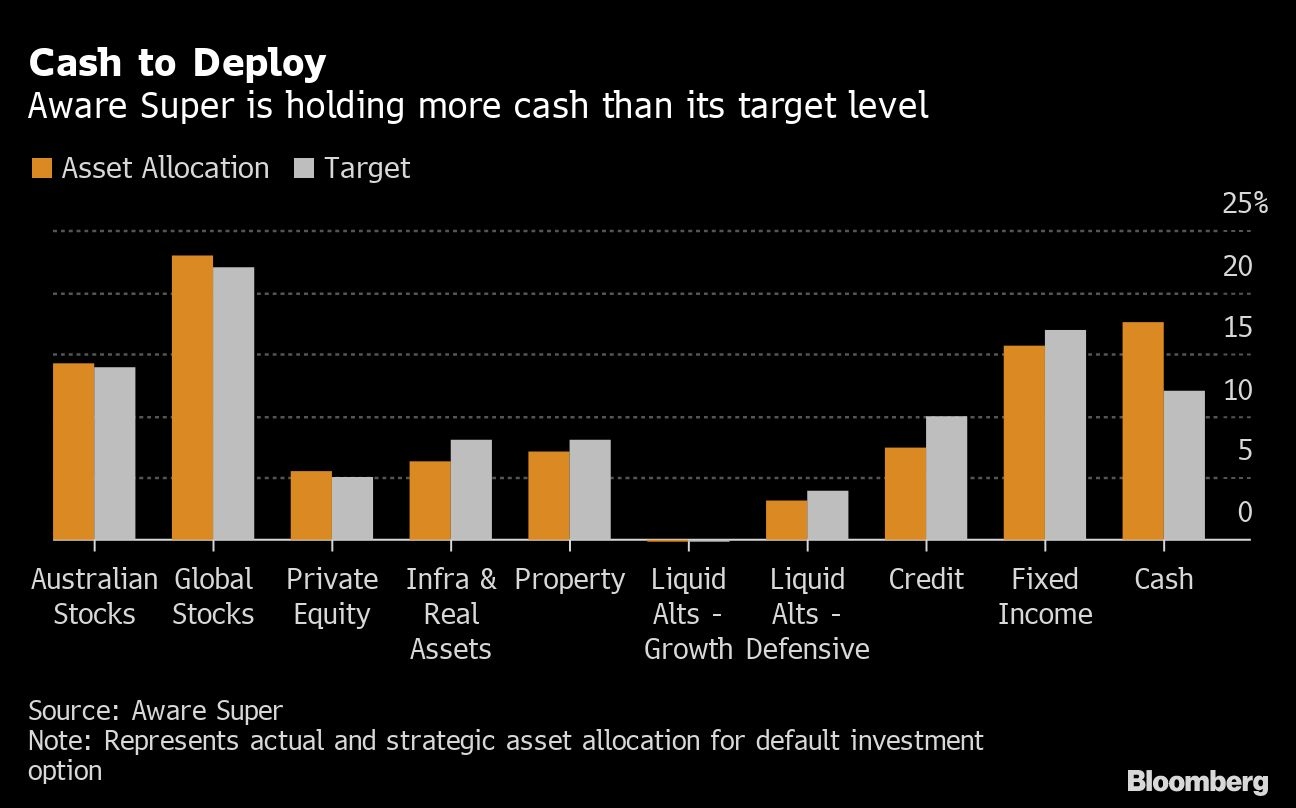 Sicilia continues to shun “outrageously expensive” bonds and is investing in stocks and private equity on bets that risk-assets will continue to outperform as central banks keep rates near record lows.

“In five to 10 years’ time, you’ll have people saying ‘we should have bought equities at 20 times earnings,’” he said. “If technology is the root cause of no inflation, that means you’re not going to be able to generate inflation anytime soon.”

While bond markets suggest there may be “inflation in the pipeline”, it might be short-lived, said John Pearce, Sydney-based investment chief at the A$90 billion UniSuper Management Pty.

The 30-year market veteran points to Japan as an example where inflation remains elusive despite years of quantitative easing and ultra-loose monetary policy. Markets today are a far cry from the 1970s when a massive oil shock and collapse of the Bretton Woods system turbocharged price hikes, he said.

“You look at the marginal cost of everything just plummeting because of the improvements in technology -- I don’t see that stopping anytime soon,” said Pearce. “We’re not a believer that we’re going to see persistently high inflation.”

It may be “worth having a look at” 10-year Treasuries if yields climb to 2.5 per cent, he said.

That’s not to say that the recent volatility hasn’t produced some buying opportunities.

When bond yields plunged to historic lows last year, IOOF Holdings Ltd. pivoted some of its funds from government debt to credit and senior loans. By December, one of the Melbourne-based pension’s underlying asset managers had switched from a long duration position -- or holding securities with higher interest-rate risk -- to a short on signs inflation pressures were building.

The wagers paid off. During the worst month for Australian bond returns on record, the fund’s fixed-income strategy rose 0.6 per cent.

“Because we’re starting from such a low base on inflation, you’re probably likely to see over the next three-to-six months” economic data showing some price rises, said Osvaldo Acosta, head of fixed-interest assets who studies bonds and stock returns to look for an inflection point for inflation. “The greatest risk that we saw for the last 12 months was the amount of stimulus both monetary and also fiscal that was coming through -- it is just tremendous.”

Even so, most of those managing Australia’s giant pension funds don’t see a return to the high levels of inflation that characterized U.S. economics in the 1970s.

“We’re going to hit an inflection point -- bonds near 2 per cent offer some insurance value that they didn’t offer when they were 80 basis points,” said Adelaide-based Michalakis. “We are in an era of slightly higher structural long-term inflation, but nothing disastrous.”