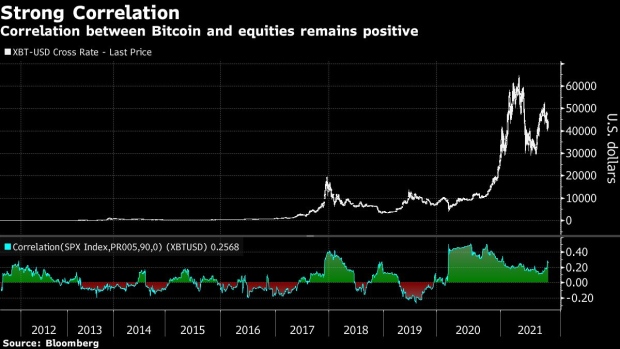 (Bloomberg) -- It was a wild day for markets Tuesday as traders digested news of supply-chain breakdowns, rising Treasury yields and the U.S. nearing its debt limit.

Oil touched a three-year high as demand continued to increase. Weather threats sent the price of cotton soaring. The yield on 10-year Treasuries rose to 1.55%, prompting stock market traders to scurry away from assets with particularly stretched valuations, like technology stocks. The Nasdaq 100 and Nasdaq Composite indexes suffered their biggest drops since March.

“Anytime we see the 10-year UST yield move such a dramatic amount in a short period of time, especially off of low starting levels, it generally coincides with a market selloff of some magnitude,” said Brian Price, head of investment management for Commonwealth Financial Network.

These were among the moves that turned heads Tuesday:

The S&P 500 was down as much as 2.2%, headed toward its 100-day average and its worst month in a year. Microsoft Corp. contributed the most to the index decline, falling as much as 3.9%. The tech-heavy Nasdaq 100 also suffered, dropping 2.9% at one point.

Among the many problems worrying markets, both Federal Reserve Chair Jerome Powell and Treasury Secretary Janet Yellen testified before the U.S. Senate and warned that a U.S. default due to a failure to raise the debt ceiling would have catastrophic consequences for the dollar.

Yields on 30-year Treasuries surged as much as 11 basis points. That slammed the $17 billion iShares 20+ Year Treasury Bond ETF (ticker TLT), which at one point plunged to its lowest level since June.

The ETF -- which tracks Treasuries maturing in 20 years or more -- is on track for its worst monthly performance since March as investors recalibrate the expected path of monetary policy after last week’s Federal Reserve meeting.

Oil prices have been climbing as recovering economies are causing demand to run ahead of supply and depleted inventories. Brent crude topped $80 a barrel Tuesday, its highest level in three years, though it fell back in the face of the equities selloff. West Texas Intermediate hovered near $75 a barrel after breaching $76 overnight.

Cotton futures on Tuesday broke the $1 a pound mark as supply worries drive up costs for the fiber. Cotton hasn’t been this expensive since November 2011.

Adverse weather and shipping disruptions have contributed to cotton’s price surge, threatening to drive up clothing costs globally. Its price has surged 28% this year, with gains intensified by traders rushing to cover short positions.

September is normally a choppy month for Bitcoin, and 2021’s version has been no exception. The world’s largest digital asset is down more than 11% this month, on pace for its worst monthly performance since May. Other cryptocurrencies have also sagged, with the Bloomberg Galaxy Crypto Index -- which tracks a handful of the most-prominent coins -- falling more than 15% so far this month.

Meanwhile, the coin’s 90-day correlation with the S&P 500 has “increased considerably” recently, according to a report from Arcane Research.

That makes sense to Matt Maley, chief market strategist for Miller Tabak + Co. “Both the Bitcoin and the S&P have benefited from the excess liquidity in the system over the past 18 months,” he said. “With inflation concerns growing, it now seems that this liquidity is going to become less plentiful more quickly than investors had been thinking.”

The Renaissance IPO Index, which tracks newly public companies, fell as much as 4.9% Tuesday, its biggest drop in a year. It’s also on pace for its largest weekly decline since mid-July. And the IPOX SPAC Index, which tracks the performance of a broad group of special purpose acquisition companies, also came under pressure, losing 1.5% at one point.

Rising yields take the shine off both those sectors, said Art Hogan, chief strategist at National Securities. “It changes the math -- you have to use more stringent multiples, you have to use more conservative multiples as interest rates rise,” he said by phone. “And that’s true in large part of all tech that is pre-earnings, the fast-revenue growers that have long duration before they have earnings,” because it forces investors to ratchet down assumptions of net-present value.