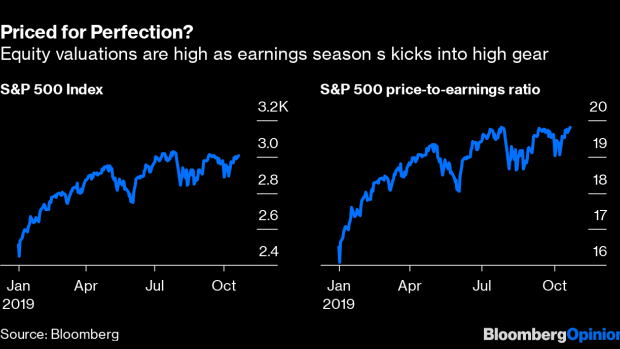 NEW YORK, NY - JUNE 28: Traders work on the floor of the New York Stock Exchange (NYSE) at the close of the trading day on June 28, 2016 in New York City. Following days of market turbulence due to Britain's vote to separate from the European Union, markets bounced back today with the Dow Jones industrial average rising over 200 points. (Photo by Spencer Platt/Getty Images) , Photographer: Spencer Platt/Getty Images North America

(Bloomberg Opinion) -- Judging by the rally in the S&P 500 Index on Monday, it would be hard to know that this week is perhaps the most important of the year for equities in terms of fundamentals — and the news likely won’t be all good. That just shows how much of a grip the U.S.-China trade talks have on traders.

The catalyst for the gains was some positive, albeit guarded, comments out of both China and the U.S. that talks aimed at reaching the first part of an initial trade deal are advancing. The absolute lack of details doesn’t really matter; it’s the lack of animosity in the rhetoric that traders found encouraging. There’s no question that the trade war has taken a toll on the global economy, and this week investors will likely find out just how lasting the damage will be when a large swath of companies post third-quarter results. Through Friday, some 15% of the S&P 500, or 77 members, had reported and their earnings came in about 2% above consensus estimates, driven by strong results from health-care and consumer-discretionary companies, according to Bank of America Merrill Lynch. This week, though, a whopping 36% of S&P 500 members will report results, led by a number of bellwether companies such as Amazon.com Inc. and Microsoft Corp. that have led stocks higher this year, as well as some key companies that are seen as referendums on the economy, such as Boeing Co. and Caterpillar Inc. There are a couple of things to keep in mind. The first is that if results come in as expected for the third quarter, which is an aggregate drop in earnings of 4%, it would be the first time since the period between Sept. 30, 2015 and June 30, 2016 that the S&P 500 posted three straight declines in profits, according to FactSet. The second is perhaps more important — namely, that this is the quarter companies generally start to provide more firm guidance for the following year.

As I have previously written, there’s a good chance that estimates of 10% earnings growth are too high, especially with the International Monetary Fund last week cutting its global gross domestic product forecast for 2019 to an anemic 3% and a still sluggish 3.4% in 2020. Analysts last week lowered their estimates for combined S&P 500 earnings in 2020 by almost $1, to $178.40 a share, according to Bloomberg News. The 0.5% reduction was the biggest for any week since January. This wouldn’t be a problem if stocks were cheap, but they’re not with the S&P 500 trading at about 20 times earnings, having risen from about 16 times in early January.

THE BOND MARKET’S RED SEAThe government bond market was a sea of red on Monday, with yields rising in such major markets as the U.S., the euro zone, U.K. and Japan. Before concluding that the jump means bond traders feel the global economy is poised to turn a corner on what is likely to be only a minor agreement between the U.S. and China on trade, consider that the global government yield curve remains inverted. Government debt due in one to three years yields 0.37 percentage point more than debt maturing in seven to 10 years, on average, according to the ICE Bank of America Merrill Lynch indexes. “The fact of the matter is you have the two largest, most relevant superpowers — the U.S. and China — still locked in negotiations which seem to have no near-term resolution in sight,” Ian Lyngen, BMO Capital Market’s head of rates strategy, told Bloomberg News. The just-concluded IMF meetings in Washington made clear that finance ministers from around the world are still reluctant to do what most market participants say is needed to jolt the global economy out of a synchronized slowdown. So while they talked about the need for more fiscal stimulus, there’s little agreement on how to do so.

CANADA’S DOLLAR APPRECIATES   In the foreign-exchange market, the default is to judge the performance of a currency against the dollar. This makes sense because the greenback is far and away the world’s dominant reserve currency. But doing so sometimes doesn’t provide a complete picture. That may be the case with the Canadian dollar. It’s actually one of the stronger currencies since Oct. 9, appreciating about 1.90% versus the greenback. But that perhaps says more about the U.S. currency’s broad weakness over that period than it does about trader sentiment toward Canada, where the political landscape has become much more muddied. In fact, voters were headed to the polls Monday in what was being forecast as a close election that might see embattled Prime Minister Justin Trudeau retain power, but lose his parliamentary majority and force him to rely on a left-leaning party to survive a second term, according to Bloomberg News. The uncertainty may be one reason Canada’s dollar has appreciated less than 0.1% against a basket of developed-market peers since Oct. 9. A government headed by Trudeau’s Liberal Party but propped up by the New Democratic Party might be a blow to Canada’s energy sector, Bloomberg News reported. The NDP is anti-pipeline, which is a problem for markets given that the country is already suffering from reduced oil prices due to pipeline bottlenecks.

PROTESTS ROCK CHILEEmerging markets have been on an upswing lately, with both the MSCI indexes of equities and currencies rising to their highest since early August. But the rising EM tide isn’t lifting all boats. Financial markets in Chile are getting smacked, with the country gripped by what Bloomberg News describes as its worst civil unrest since the nation returned to democracy more than three decades ago. It’s so bad that President Sebastian Pinera declared a state of emergency Friday and called on the army to restore order. The nation’s benchmark IPSA index of equities fell 5%, the most since November 2017 and led by retail companies at risk of looting and the utilities sector. Chile’s peso lost 2% of its value. Chile is important to global markets for one big reason, which is that it’s the world’s largest producer of copper. Workers at BHP Ltd.’s Escondida mine, the world’s largest copper operation, were due to hold a “warning stoppage” for 10 hours starting late Monday or early on Tuesday in solidarity with protests taking place across the country, and an umbrella group of unions and mining federations was calling for a general mining strike on Oct. 23. Copper futures climbed to the highest in more than a month in New York.

TEA LEAVESThe question of whether the universally strong U.S. housing data for August was an aberration was partly answered last week when the Commerce Department said housing starts tumbled a greater-than-forecast 9.4% in September after soaring 15.1% the prior month. Another piece to the puzzle will be revealed Tuesday when the National Association of Realtors releases its report on existing home sales for September. The median estimate of economists surveyed by Bloomberg News is for a decline of 0.3%, following a 1.3% jump in August. There’s no question the big drop in mortgage rates has given the residential real estate market a boost, but recent reports showing pressure on consumer confidence and sentiment, along with a drop in retail sales suggest the lift may have only been due to fence sitters jumping into the market rather a sign that there’s dome deep pool of buyers.