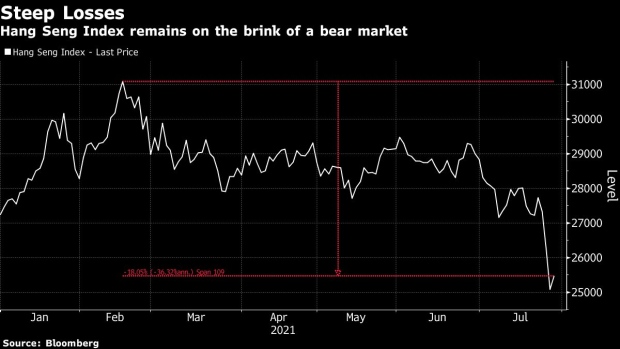 (Bloomberg) -- After a week of market turmoil, China watchers are looking for signals from a key Politburo meeting this week on whether there’s more pain to come and if the central bank will step in with support.

The July meeting of the Communist Party’s top leadership is typically when they review the economy’s performance in the first half and set policy priorities for the rest of the year. It’s taken on heightened significance this time around after authorities roiled financial markets with a spate of regulatory overhauls that tightened the state’s grip on industries from private education to technology and property.

“On the macro level, policies are likely to be looser on the margin, but on the micro level, intense regulatory tightening will probably continue,” Larry Hu, head of Greater China economics at Macquarie Group, said in a phone interview. The Politburo will likely reiterate its previous statement on regulating platform companies and strengthening anti-monopoly work, he said.

With Beijing expected to comfortably meet its growth target of more than 6% this year, authorities have a small window of about three to six months to push through structural reforms before growth pressures kick in next year, he said. In April, the 25-member Politburo vowed to “make good use” of the current period of low risks to growth.

For example, the Politburo said in its April meeting it will prevent speculation around soaring prices of housing in good school districts. Shortly after, the government imposed more property cooling measures across major cities.

In December, the Politburo vowed to strengthen anti-monopoly efforts to rein in what it called “disorderly capital expansion.” That was followed by a slew of regulatory actions in the tech sector this year, including a record $2.8 billion fine on Alibaba Group Holding Ltd., as well as measures to target speculation and hoarding in the commodities market.

“Most of these regulatory actions involve industries where the speculation of capital has made a few people rich at the cost of the benefit of the public,” said Ding Shuang, chief economist for Greater China and North Asia at Standard Chartered Plc in Hong Kong. Apart from education and property, the next focus of policy reforms could be on the pricing of medical services and the elderly care industry, which are key to people’s livelihoods, he said.

Beijing will also need to repair some of the damage done to investor confidence by its abrupt measures, with analysts looking out for signs of this in the Politburo meeting.

“If the meeting emphasizes that the regulations will be carried out in an orderly manner, that could at least help improve the market sentiment temporarily,” Ding said.

The monetary policy stance will also be a focus in the Politburo statement after the People’s Bank of China surprised the market earlier this month by cutting the reserve requirement ratio for banks, unleashing more cash for them to lend.

Economists from Goldman Sachs Group Inc., Macquarie, Standard Chartered and Oversea-Chinese Banking Corp. project another RRR cut this year, which will inject liquidity to help banks repay 3.75 trillion-yuan worth of policy loans from the PBOC’s medium-term lending facility coming due before the end of the year.

Tommy Xie, head of Greater China research at OCBC, said interest rates are likely to be kept steady and the slowdown in credit growth since late last year may be bottoming out soon.

The government could also ramp up fiscal support to the economy in the second half and accelerate bond sales after a sharp slowdown in spending in the first six months of this year, according to Xu Hongcai, deputy director of the China Association of Policy Science’s economic policy committee, a government-linked think tank.

Here’s an overview of the language used in the statement following the April Politburo meeting: