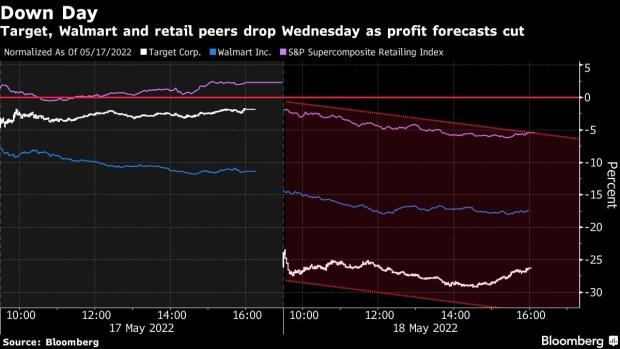 (Bloomberg) -- The consumer stalwarts that thrived throughout the pandemic-era bull market have finally buckled.

Target Corp. plunged the most since Black Monday in 1987, a day after Walmart Inc. suffered a similar fate, on signs that runaway inflation is hurting the US consumer and eroding profit margins. The selloff wiped out more than 7% from an index of retailers in the S&P 500, while the broader index sank 4% and back closer to a bear market.

Retailers of everything from clothing to bicycles and home-improvement items had delivered quarter after quarter of earnings as Americans, flush with cash from government stimulus and sitting on bloated equity holdings, spent freely in the aftermath of the pandemic. With the Federal Reserve now turning restrictive to combat rising prices, the stock market’s fourth biggest group no longer is able to deliver profits that justified lofty valuations.

Target ended the session at its lowest level since November 2020, while Walmart closed at its lowest since July of that year. Both retail giants cut their growth outlooks for the full year on surging costs.

“What we’re seeing this week from big-box retailers could be a clue as to what a recession might feel like for markets overall,” said Mike Bailey, director of research at FBB Capital Partners. “We’re seeing consumers vote with their wallets on what they value most.”

Read more: A Little Suffering at Walmart, Target Is a Good Sign for the Fed

Against the multitude of bear cases strafing the market, one big rebuttal has existed to soothe investor nerves: earnings have been good, and are poised to get better.

Combined S&P 500 profits are projected to rise 10.1% this year and by 9.5% in both 2023 and 2024, according to estimates compiled by Bloomberg Intelligence. Based on those, valuations for US stocks go from very high to more palatable: the S&P 500 carries a price-earnings ratio of less than 16 based on 2023 forecast.

Estimates for this year have risen steadily over the last five months. Should anything alter the perception that income growth will weather the economy’s travails, it would deprive the market of its last major safety net.

And to be sure, not all retailers shocked the market. TJX Cos. soared the most since 2020 as the company bucked the trend of eroding profitability for US retailers with a higher forecast for full-year margins.

Anna Han of Wells Fargo Securities says she’s been souring on retailers for a while. But, as consumers shift to spending more on activities, there could be some winners. “We’re still positive on the sources where you can have leisure spending, where you can have those reopening trades, the travel-tied industries,” she told Bloomberg TV.

Johnston on Wednesday removed a short-term rally call on US stocks made on May 2.

“Seeing that risks are quite high right now combined with our view that the short term potential upside is much smaller than we thought 2 weeks ago, it no longer makes sense to own equities,” he said.