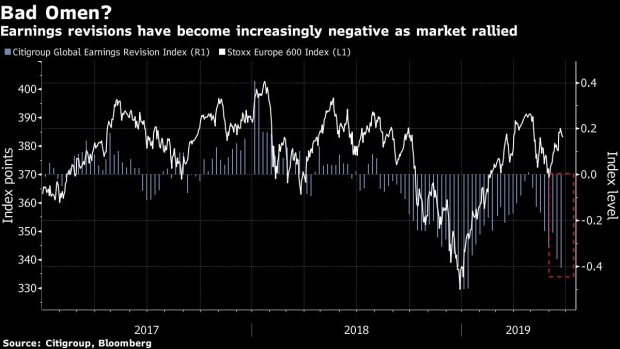 (Bloomberg) -- With geopolitical tensions and trade fears simmering, all the action is in havens as nervous investors pile up on gold and Swiss francs. The overall market may be resilient for now, but unresolved economic and political issues could still hit confidence and corporate earnings.

In an eerie calm, stock volatility remains low for both the S&P 500 and the Euro Stoxx 50 ahead of the G-20 meeting between U.S. President Donald Trump and China’s Xi Jinping, during a strong month for equities. Europe’s benchmark and the S&P 500 have gained 5% and 6%, respectively in the period.

“I’ve been surprised at how benign the market environment has been during this year so far, given the amount of stuff that’s going on in the wider economic and geopolitical context, both here and internationally,” says Ken Wotton, a fund manager at Gresham House in London. “I just find it very hard to believe there won’t be periods where sentiment, risk appetite retracts and there’s more volatility in the market.”

The market’s composure jars with the lack of confidence from analysts, who have been cutting earning estimates as much as in January, according to Citigroup’s earnings revisions index.

The worries are visible in investment flows, though. Bank of America Merrill Lynch’s clients have been net sellers of U.S. stocks in the past week for the first time in seven weeks, in a possible effort to freeze gains ahead of the G-20 summit, the bank’s strategists say. During the past five weeks, foreign-exposed sectors saw bigger outflows than domestics, they add.

The market may have learned to live with trade tension, counting on dovish central bank policies to act as a cushion, but it doesn’t change the fact that global commerce has been reshaped by tariffs and disputes. China’s imports from Japan, South Korea and the U.S. fell 16%, 18% and 27% respectively last month from a year ago. Those from the European Union are still growing (+1.8%), but at a much slower pace.

That’s also why the Trump-Xi meeting matters, even if a deal is unlikely. UBS Wealth strategists don’t expect any breakthrough on trade, nor extra tariffs immediately. Their base-case scenario is for a prolonged truce between the U.S. and China that would likely extend or consolidate the stock rally. But a breakdown would thump economies and markets, they say.

In the meantime, Euro Stoxx 50 futures are trading down 0.3% ahead of the open.

NOTES FROM THE SELL SIDE:

* For a daily wrap on developments in European equity capital markets, click here

To contact the editors responsible for this story: Blaise Robinson at brobinson58@bloomberg.net, Jon Menon