Markets haven’t fully accounted for possible tax increases and new financial rules that may result from a Democratic sweep in November: Joe Biden winning the White House, Democrats capturing the Senate and keeping control of the House, according to Raymond James.

The St Petersburg, Florida-based firm boosted its election probabilities for a Biden win to 55 per cent, with a 50 per cent chance of Democrats taking the Senate and a 95 per cent chance of Democrats retaining the House, factoring in the economic disruption caused by Covid-19 and nationwide protests against racism and police brutality, analyst Ed Mills wrote in a note. Even so, he acknowledged that five months is “an eternity,” and President Donald Trump still has ways to win.

A Biden victory could go either way for stocks, Mills said. “Conventional wisdom would suggest a ‘Dem Sweep’ would be market negative (especially for heavily regulated industries in 2021), but economic suffering could demand additional fiscal support,” which would be positive for markets, he said.

Even as Biden’s fortunes are rising, Trump has a variety of tools at his disposal, including the benefit of incumbency, the possibility the economy will recover heading into the election, and his topping Biden in “campaign fundamentals” such as fund-raising and social media, Mills said. He sees the potential for Trump to push hard for a COVID-19 vaccine or a “shock event narrative shift,” including the risk of a heightened confrontation with China. 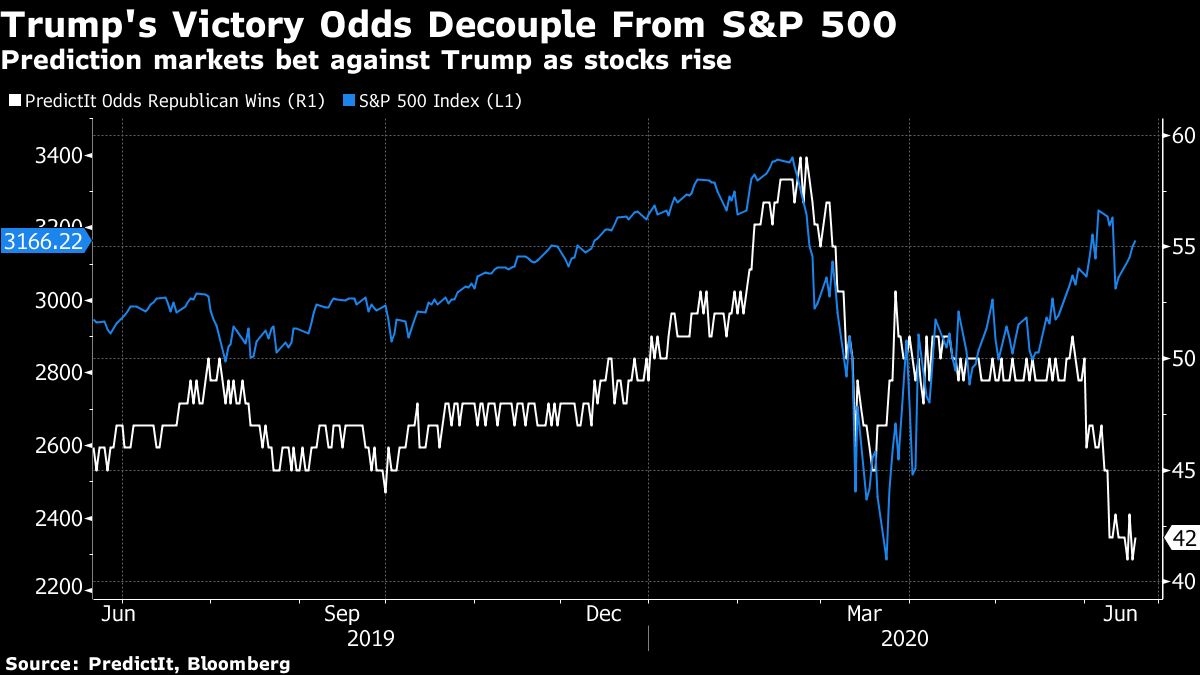 Trump is due to hold a rally in Tulsa, Oklahoma on Saturday that was initially scheduled for Juneteenth, a commemoration of the end of slavery. On Thursday, a Fox poll showed Biden widening his national lead over Trump to 12 points from an 8-point advantage last month; among independents, Biden is preferred over Trump 39 per cent to 17 per cent, while 43 per cent say they are undecided or supporting someone else.

U.S. equity futures rose on Friday morning as investors cheered the latest breakthrough in trade negotiations between the U.S. and China. The S&P 500 has climbed 39 per cent since its low for the year on March 23.