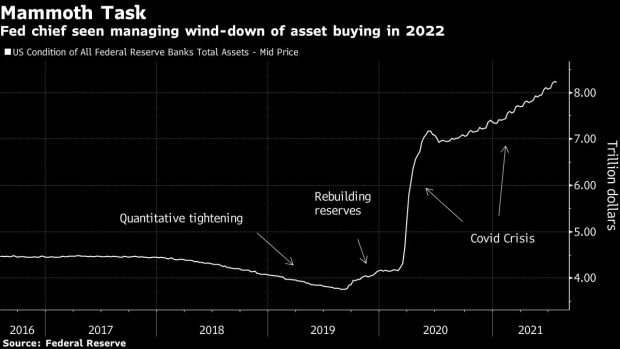 (Bloomberg) -- On Wall Street, investors are banking on another four years for Jerome Powell as chair of the Federal Reserve -- introducing a potential risk for President Joe Biden should he opt to replace him.

Diamond’s take aligns him with the bulk of Fed watchers. Forty among the 50 economists Bloomberg surveyed on the question last month anticipated that Biden will restore a decades-long tradition of reappointing a presidential predecessor’s Fed chief. Donald Trump broke the pattern in elevating Powell, then a Fed governor, to chair in 2018.

The Fed is now heading toward its first tightening under a new policy framework, adopted a year ago, which pays greater attention to parts of the labor market that historically hadn’t enjoyed the gains others had by the time the Fed began raising rates. Powell himself said last week the new arrangement will face a “test” when it comes time to boost rates.

“The Fed is going on a new limb here since the pandemic. It’s taking on a more progressive social outlook as part of its policy,” said Gary Pollack, head of fixed-income for private wealth management at Deutsche Bank. “If Biden does not re-appoint Powell there will be a negative bond-market reaction,” he said, citing potential concern about the Fed “losing its focus on inflation” in favor of social goals.

Among the reasons behind the tradition of reappointments were that retaining the existing central bank chair lent the continuity to policy-making that investors liked and also strengthened the Fed’s independence by removing suggestion of a president exerting political influence. Even Ronald Reagan in 1983 left in place Paul Volcker, whose policy tightening had triggered a recession.

Stability was the watchword. And so it remains for investors anticipating that the Fed will be withdrawing its monetary stimulus possibly as soon as later this year, and preparing the ground thereafter for raising interest rates. That would pose a full slate for a new chair taking office in February.

“Replacing Powell right now is like changing your pilot in the middle of a turbulent landing,” said Max Gokhman, head of asset allocation at Pacific Life Fund Advisors.

Others said investors would take news of a Powell replacement in stride, if it proves to be a central bank veteran.

The most likely alternative is Lael Brainard, who’s been on the Fed board for more than seven years and previously served as a senior official at the Treasury Department and at the White House National Economic Council. Federal Reserve Bank of Atlanta President Raphael Bostic was the other potential candidate receiving votes in Bloomberg’s survey last month; he would offer Biden the chance of nominating the first Black, and openly gay, person to run the Fed.

Wall Street would be content with a familiar face with experience in monetary policy such as Brainard or Bostic, said Charles Myers, chairman and founder of Signum Global Advisors.

“The economic team in the White House are incredibly smart, and aware of potential market fallout if they try to go in a direction that would be disruptive to markets,” said Myers, a former vice chairman of Evercore.

But a more liberal candidate could prove particularly unsettling, in the minds of many.

“The fact that he has been kind of drifting left, or drifting progressive, whether it’s on climate or income inequality -- I think that that’s consistent with what the administration would want,” said Erika Karp, the founder and CEO of Cornerstone Capital Group, a self-described socially conscious investor. “So if there is a new appointment that is further left -- I think that would be problematic for the markets,” she said.

Even for a central bank veteran, overseeing monetary tightening can be testing. Powell had been on the Fed board for almost six years by the time he took the top job. Yet in late 2018, his comments spurred volatility in markets as he stuck to a more hawkish line than some traders felt was warranted -- such as leaving a shrinking of the balance sheet “on automatic pilot.”

Next year, it’s possible that some members of the policy-setting Federal Open Market Committee will be arguing for a more aggressive timetable of stimulus withdrawal. A fresh set of regional bank presidents rotates on to the FOMC in the new year, a group that on balance Fed watchers say could impart a hawkish tilt -- adding a potentially tricky element for a new Fed chair.

“The question the market would have -- and I would have -- is will this person be able to steer the committee in the direction he or she prefers? Will they have the ability to do that -- which is not a simple thing,” said Roberto Perli, a partner at Cornerstone Macro LLC. “Powell has the confidence and respect of most of the committee. Anyone else will have to earn that.”

Perli, who previously worked on monetary policy at the Fed as a senior staff member, said, “What worries me is that this is the first time in modern memory that a Fed chair position is open when Fed policy is not on an obvious course.”

In other words, the Fed chief in 2022 won’t be simply overseeing a pre-set course for tightening, but will have to lead the actual drafting of such a course. Removing Powell means a step into the unknown, raising risk in the bond market of “overall higher volatility in rates and higher rates,” Perli said.