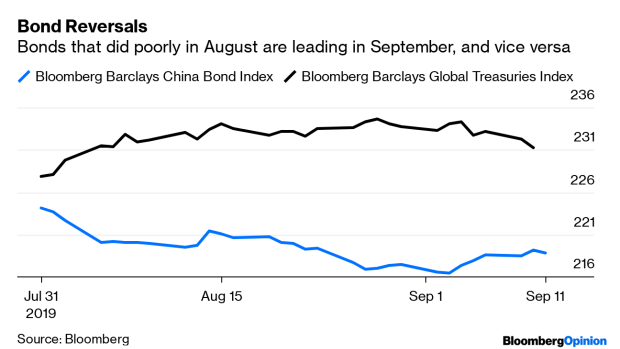 (Bloomberg Opinion) -- There are times when the fundamentals get thrown out the window and greater forces take over the market. The first part of this week was a prime example as investors decided en masse to do some rebalancing by shifting out of stocks that have outperformed largely because of sheer momentum into those that have lagged, namely deeply discounted value stocks. This shift did little to overall valuations, with the MSCI All-Country World Index gaining a grand total of 0.01% on both Monday and Tuesday.

Markets returned to some sense of normalcy on Wednesday, with the MSCI surging as much as 0.72% to its highest since the start of August. The move may be a sign investors are confident the European Central Bank on Thursday will pull out the proverbial bazooka to spur the region’s flagging economy and encourage other major central banks to follow suit. That means not only cutting interest rates and turning dovish on the outlook for rates but also announcing a plan to resume quantitative easing by buying at least 40 billion euros ($44 billion) of bonds each month for a year. Such speculation was reinforced by a rally in euro zone government bonds Wednesday and the Bloomberg Euro Index touching its lowest since mid-2017. But it’s also likely the ECB stores the bazooka and pulls out the pellet gun instead. Bank of France Governor Francois Villeroy de Galhau is one of several ECB policy makers who have signaled skepticism over the need for renewed QE. In fact, some strategists including James Bianco of Bianco Research consider the ECB’s decision to be perhaps the most important central bank decision of the next few weeks, and that includes the Federal Reserve’s meeting on Sept. 18.

According to Bianco, if ECB policy makers do not deliver the expected rate cut or a new QE program Thursday, they would be “sending a powerful signal that they have indeed reached their limit” of effectiveness. The alternative isn’t that great, either, because it would mean policy makers “don’t know what else to do,” Bianco wrote in a research note. “This will only further damage their financial system,” he added. So while equity markets have benefited greatly from extraordinary central bank stimulus since the financial crisis, the times may soon be changing.

THE GREAT BOND ROTATIONThe bond market, of course, also has a vested interest in the ECB’s decision. At least some of the backup in government debt yields globally the last week or so can be attributed to some doubts that the ECB will resume its QE program in light of the push-back from Villeroy and other officials. But, as always, there is more going on in the bond market, which has also been caught up in the rotation from “momentum” to “value,” skewing the signals being sent by bond yields. That can be seen in this month’s best-performing bond markets, which happen to have been the biggest losers in August. And this month’s losers were last month’s winners. The Bloomberg Barclays China Aggregate Index tumbled 2.95% in August even as the broader market rallied. This month, it’s up 0.61% while the broader market is down. Another big turnaround is taking place in the global high-yield bond market, which has gained 0.74% this month after tumbling 1.56% in August in its largest slide since October 2018. Government bonds globally are down 1.18% this month after surging 2.59% in August to match their best monthly performance since June 2016. But as with equities, this rotational move may come to an end with the ECB meeting Thursday. “We live in an interconnected world and any adjustment in European rates will have an effect on” rates in the U.S. and elsewhere, Bianco added in his research note. But if the ECB decides not to cut rates or resume QE, “we could start the conversation” on whether rates globally have bottomed.

CAREFUL WHAT YOU WISH FORPresident Donald Trump took another shot at the Fed on Wednesday, tweeting that it should “get our interest rates down to ZERO, or less.” He ended the missive by calling policy makers “boneheads.” On the surface, zero or even negative interest rates sound attractive, but there is a growing sense that they do more harm than good, especially to the banking system. And a healthy banking system is generally accepted as a key to a healthy economy. Consider Europe, where the Euro STOXX Bank Index has dropped 39% from last year’s peak in January. The banking industry makes a large chunk of its money by borrowing at low short-term rates and lending the proceeds at higher long-term ones, pocketing the difference. That becomes impossible when rates are zero or negative and yield curves flatten as a result. Lenders including Deutsche Bank AG and UBS Group AG have already complained about the hit to their profitability from the ECB’s policies, potentially hindering their ability to supply the credit that fuels the economy, according to Bloomberg News’s Yuko Takeo and Nicholas Comfort. They point out that the ECB’s deposit rate used to be the interest banks received for keeping their excess cash at the central bank overnight, but at minus 0.4%, it has become a charge, one that Deutsche Bank says could cost it hundreds of millions of euros this year. Scope Ratings figures that euro-area banks have incurred 23 billion euros of charges at the ECB since negative rates started in 2014 and are now paying almost 7 billion euros a year.

MEXICO’S LOOKING UPInverted yield curves happen when long-term rates in the bond market fall below short-term ones. This phenomenon is generally believed to augur a recession, or at least a severe economic slowdown. In the current environment, there is no shortage of inverted yield curves around the world. One place where an inverted yield curve may be sending false signal is in Mexico. The peso is one of the world’s best performers this month, appreciating 2.77% against the dollar, as recession fears ease and the nation’s inverted yield curve looks poised to turn positive. The 2-year/10-year swap rate spread now stands at just minus 2 basis points, compared with a nadir of 23 basis points a month ago, when Mexico seemed headed for recession, according to Bloomberg News’s George Lei. As it turned out, the nation managed to skirt two consecutive quarters of contraction, and the central bank provided an extra boost by cutting interest rates in August. Banxico’s decision to cut rates by 25 basis points on Aug. 15 helped send the spread higher because it was sooner than most people expected, said Jens Nystedt, a senior portfolio manager at Emso Asset Management. Dovish remarks from Mexican policy makers and a slowdown in inflation toward the 3% target also helped, Nystedt said.

NATURAL GAS IS GETTING INTERESTINGMany traders got burned when natural gas suddenly shot up some 41% last November before tumbling 36% in December. The wild swings were widely thought to be tied to a complicated trade set up by one or more big investors that in essence bet on a gain in oil and a drop in natural gas. When oil started moving opposite of the desired direction, the trader, traders or even a company in the energy industry had to quickly reverse their positions, exacerbating the moves in oil and natural gas. Now the natural gas market is setting up for some more wild volatility tied to what traders believe will we a winter supply crunch. The premium that gas for delivery next March is fetching over the April contract, a spread known as the widow-maker for its volatility, has jumped 60% in the past two weeks, according to Bloomberg News’s Naureen S. Malik. Though production from shale basins is at a record, the demand boost is poised to limit how much is added to underground stockpiles. That’s stoking concern about a potential supply squeeze in the winter, when consumption of the heating fuel peaks, Malik reports. While gas prices have climbed over the past two weeks, futures are still near the lowest levels since 2001 for the time of year, straining producers’ balance sheets. That means this winter could be make-or-break for some explorers, said Rich Redash, head of global gas planning with S&P Global Platts.

TEA LEAVESFor all the talk about nonexistent inflation, the data seem to be showing something different. The core U.S. consumer price index rose 0.3 percent in both June and July, the first back-to-back increases of that size since 2001. The government on Thursday is forecast to say that the measure rose 0.2% in August. But any increase above that is sure to roil markets, where high prices for most all financial assets have been predicated on minuscule inflation. The increases in June and July “combined with upward surprises on average hourly earnings in July and August suggest that firmer inflation pressures are finally re-emerging, and that soft inflation earlier this year was, in fact, transitory,” the team at Bloomberg Economics wrote in a research note.