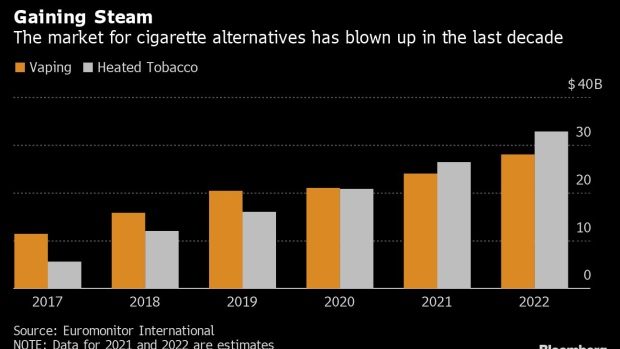 A pedestrian exhales a cloud of vapour from a vape device in London, U.K., on Thursday, Oct. 17, 2019. Vaping has helped tens of thousands of Britons quit smoking each year, a study showed, underlining the U.K.'s more tolerant stance on the alternative to cigarettes as a backlash grows in the U.S. Photographer: Hollie Adams/Bloomberg , Bloomberg

(Bloomberg) -- Warren Buffett once described the tobacco industry as a no-brainer: make a cigarette for one cent and sell it for a dollar. Those days are long gone.

With the rise of heated tobacco, vapes and nicotine pouches, companies such as Philip Morris International Inc. and British American Tobacco Plc are shifting from simple cigarettes to high-tech, rechargeable gadgets.

The explosion of inventions to deliver nicotine without the most harmful effects of smoking has sparked scores of disputes over who owns the technology. Tobacco companies that once competed for the best marketing executives are now chasing the top patent lawyers.

The situation may become even more tense now that the big players have announced plans to exit Russia after its invasion of Ukraine. Russia is not only the world’s fourth-largest cigarette market by volume, but also an important region for heated tobacco products, meaning companies will likely try to compensate with growth elsewhere.

A detailed patent review estimates that 73,758 patents related to vaping, heated tobacco and smokeless products were published in the decade through 2020. The report was compiled by Roya Ghafele, founder of IP consultancy OxFirst and commissioned by The Foundation for a Smoke-Free World, which is funded by Philip Morris.

Philip Morris filed more than 20 times as many new patent applications in smoke-free innovations between 2018 and 2020 than it did in the two-year period a decade earlier, a spokesman said. BAT said it filed more than 350 patents related to new categories in 2021, up from about 50 in 2015. Applications are typically filed early in the research and development phase; winning the patent grants the holder exclusive rights to commercialize the invention for a certain amount of time.

“Tobacco companies are newcomers in the patents space, and leading firms have quickly retained talent from other sectors because they realize that a lack of IP awareness can be a risk to the future of their business,” said Ghafele.

Philip Morris has retained lawyers at Latham & Watkins who have represented automakers, tech companies, and the victor in a decades-long battle over the invention of artificial blood vessels. Reynolds has hired attorneys at Jones Day who argued cases on behalf of Alphabet Inc.’s Google and Johnson & Johnson, and also handled patent cases involving technology for autonomous vehicles and semiconductors.

“The industry is compensating for a vacuum of innovation in the last 50 years, and then suddenly somebody starts innovating with a product aimed at reducing smoking -- and everyone is going into this space,” Philip Morris Chief Executive Officer Jacek Olczak said in an interview. “More people are investing in innovation, which is a good thing. The validity of patents is a separate issue, which we’re learning.”

Philip Morris last year was barred from importing the IQOS heated-tobacco sticks into the U.S. after losing a legal battle with BAT. Philip Morris repeatedly argued that it was a public-health matter because IQOS was the only heat-not-burn product authorized for sale in the U.S.

BAT subsidiary Reynolds American Inc. first sued in April 2020, claiming Philip Morris and Altria copied patented technology that it had developed for its Vuse products. The companies have since lodged additional patent-infringement claims against each other in U.S. courts, and have asked the U.S. Patent and Trademark Office to cancel the other company’s patents.

The e-cigarette, which aerosolizes nicotine, is widely thought to have been invented two decades ago in China, when pharmacist Hon Lik sought to figure out a less harmful way to satisfy nicotine cravings. He eventually sold his company’s patents to Imperial Brands Plc in 2013, which was followed by a series of vaping patent infringement disputes.

More litigation is looming as the companies move into the smokeless category, which includes nicotine pouches and medical therapeutics. That segment, along with attempts to find alternative ways to electrical heating, means the companies face a patent minefield in every area of expansion.

Swedish Match AB tried to shut down rival makers of nicotine pouches, which resemble small teabags that are placed on the upper gum, though its case against closely held Dryft Sciences LLC failed. Kretek International Inc. sold the Dryft nicotine pouch business in 2020 to BAT, which sells the pouches under the Velo brand. Swedish Match is appealing the ruling.

“Innovation has been happening on the fringes of the tobacco industry for all the right reasons: to lower the risk,” Dryft President Jason Carignan said in an interview. “It just feels like these predatory tactics are preventing consumers from having the access they deserve to lower-risk alternatives to nicotine.”

According to OxFirst’s Ghafele, the industry needs to “conceptualize intellectual property in a different way” if innovations are going to help lower the risks linked to nicotine products.

The industry should move “away from the hardcore approach where patents are just there to prevent other people from using your technology and shut them down if they do, toward a thinking of how patents can be used to create bridges and to something more positive,” Ghafele said.