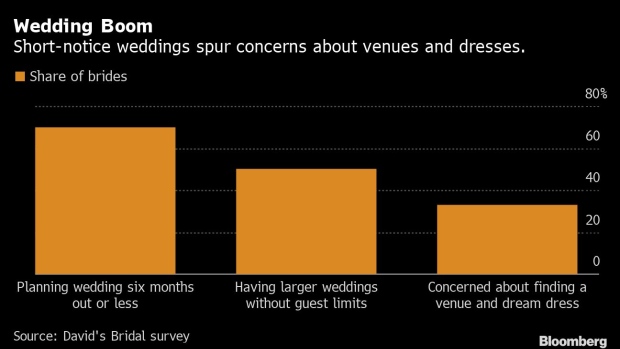 (Bloomberg) -- Last week, Kate Zhang snapped up a wedding dress at a bridal store in Manhattan. It was only her second appointment.

Her decision to get married was slightly less hurried. Zhang and her fiancé, Harrison Li, agreed to tie the knot the weekend before. Granted, they had waited more than a year because of the pandemic, but this summer seemed like a window of opportunity to finally take the plunge. Now that they’ve chosen to move ahead, they’re going to wait just a month before taking their vows.

Zhang and Li are by no means an exception. They are two among throngs of Americans eager to get hitched quick. Vaccinations, relatively low infection rates in some parts of the U.S. and diminished precautions emboldened couples to hold their celebration. Whether the rush is out of frustration with the 18-month delay or fear that variants will trigger new lockdowns, many are choosing to get married in a matter of months—or even days.

That stampede has sparked a scramble for everything associated with nuptials, including formalwear such as tuxedos and especially gowns. Prices—as you would expect—have acted accordingly. In fact, the intense demand has created a new problem for couples: Getting married now in exactly the way you want can mean spending a lot more than before the pandemic.

Don’t have $1,300 (or more) to guarantee your gown for an August date? Settle for less or enjoy a winter wedding.

Standing in the brightly-lit dressing room at David’s Bridal Manhattan store, Zhang was handed a bell to ring to celebrate her find: an off-the-rack sample gown that came close to fitting her like a glove and required only minimum alterations. Her thought process was simple, she said: “Whatever fits on my body, I’m going for it.”

While it’s possible to get your hands on wedding wear on short notice, you’ll have to fork over a lot more for expedited delivery—maybe as much as half of the price of the gown. No matter how much money you have to throw around, you’ll have to be flexible with preferences given how many others are chasing the same clothes. And if you’re looking for a try-on appointment, stylists advise booking this very minute, since shops are already teeming with customers.

This year, marriages in the U.S. are expected to jump by more than 50% following their pandemic-year slump, according to industry research firm The Wedding Report. Moreover, fear that guests will get infected with the coronavirus declined 20% from January to June, according to a David’s Bridal survey of brides.

But couples don’t know what’s around the corner, given the spread of the delta variant and vaccine refusal by millions of Americans. So they don’t want to delay. Around 70% of the 750 brides polled between April and June were planning weddings six month out or less, and roughly 33% said they were concerned about finding a venue and their dream dress.

Alex Valenzuela, sales manager at the David’s Bridal in Manhattan, said it wasn’t clear until recently whether couples should seek laid-back styles for backyard weddings or ritzy gowns for hotel ballrooms, since there was no way to know what would be available. Even now, it’s possible the window may close again.

Some brides-to-be (at least those who can afford it) are hedging their bets and buying two dresses: a simple one for a small ceremony and a more elaborate version for a larger fete later—whenever that is.

In March, Gabby Hernandez finally tried on her dream gown at a boutique in Houston, a three-hour drive from her home in Austin, Texas. After mentioning that her wedding date is in October, “they kind of looked at me like I was crazy,” she said.

Hernandez said she fell in love with a dress from couture fashion house Galia Lahav that would ship from Israel. But in May, she was warned of possible delays. She’s crossing her fingers it will arrive on time.

“At this point I’m just like, ‘whatever happens is going to happen, and I’m going to have to be OK with the outcome,’” she said. Galia Lahav didn’t respond to a request for comment.

Sellassie of Designer Loft said some gown makers still face production delays, in part due to the suddenly-shortened timelines of so many couples. To avoid disappointing her customers, Sellassie said she isn’t taking custom orders for brides who want dresses in less than three months. Instead, she’s focusing on her existing inventory.

“Never in my 20 years in bridal has a designer given me a confirmation date and then just arbitrarily switched the date to two months later,” Sellassie said. “It’s happening now.”

That said, there’s a lot of money being made. Rush fees from designers have almost doubled, she said. Some who charged $200 to speed things up before Covid struck now want up to $500 while simultaneously raising prices on older stock. Sellassie does note however that designers were hit hard by Trump administration tariffs on China (where many pieces originate) and now overtime pay, since the pandemic has made staffing up difficult.

For last-minute shoppers, large stores such as David’s Bridal and Kleinfeld Bridal (the Manhattan store featured on the reality show “Say Yes to the Dress”) said they can accommodate requests on short notice, given their large selection of off-the-rack and sample gowns. To deal with the pent-up demand, David’s has boosted its number of stylists by 20% over pre-pandemic levels, hiring more of them to help brides pick dresses and accessories, Chief Executive Officer James Marcum said in an interview. (Zhang, whose wedding is Aug. 20, said she over-budgeted, since she knew she’d have limited options. Her gown cost around $1,285 before taxes.)

Kleinfeld can place expedited custom orders with designers, spokesperson Jennette Kruszka said in an email. But it won’t be cheap: Some will charge a rush fee that can range from 20% to 50% of the dress price, depending on the style and timeline. The store’s special-order dresses start at $2,000.

For alterations, the typical package starting eight weeks ahead of a wedding runs at $895, but can climb to $1,395 for people kicking off the process less than 45 days before the nuptials, Kruszka said. In normal times, brides would shop at Kleinfeld nine to 12 months before a wedding. But this year, the store has seen an influx of customers with dates four to six months away.

It’s a bit different at boutique stores such as Shareen, which specializes in custom-made, classic gowns that average $3,500. Owner Shareen Mitchell said her company is already booked through December, and given that roughly 2.5 million weddings are set to occur in 2022—the most since 1984—she’s advising next-year brides to start shopping now.

“So much has gone wrong, and I just felt like it was a nice sign for one thing to go right.”

But after a year of uncertainty, some are looking to avoid the mad rush. And in doing so, they are turning to a corner of the wedding-industrial complex you may not have heard of. Brittany Matzke started looking for a new dress two months ago, even though she already has one. She explained that her old dress reminded her of the pandemic and having to postpone her March 2020 wedding—twice. Wary of delays for new orders, she visited resale portal PreOwnedWeddingDresses.com and found a gown another bride was selling. The measurements matched her precisely.

“I got a screaming deal,” Matzke said. “So much has gone wrong, and I just felt like it was a nice sign for one thing to go right.”

At the other end of the spectrum, those lucky couples with cash to burn are going all out. As many brides reach for simple styles that proved popular during last year’s Zoom-marriages, some are opting for opulent dresses, Mitchell said. Kleinfeld’s Kruszka agreed: her store has “lots of requests for extravagant ball gowns,” as well as mermaid-cut designs with beading and embellishments.

Indeed, this year, shoppers are expected to spend around 5% more on their dresses than in 2019, according to The Wedding Report.

“Everybody’s been sitting at home wearing their Lulus,” Mitchell said. “Just the idea of even being able to go out and get dressed up again is so inspiring and exciting.”