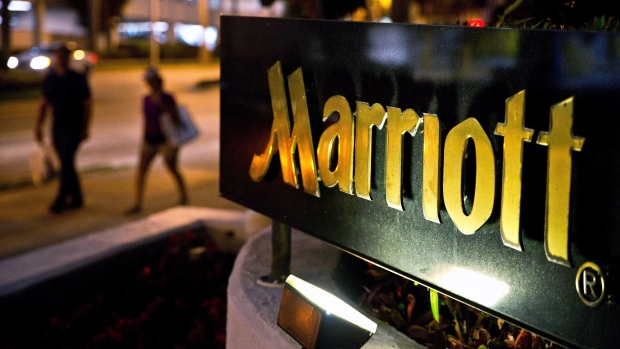 A light illuminates signage displayed outside the Miami Marriott Biscayne Bay hotel in Miami, Florida, U.S., on Wednesday, May 3, 2017. , Bloomberg

Capuano, 55, will replace Arne Sorenson, who died at 62 after a battle with pancreatic cancer, according to a statement on Tuesday. He becomes just the fourth leader in the company’s history and faces the daunting task of navigating a global crisis that has sapped travel demand and raised doubts about the long-term prospects for corporate travel.

Capuano was one of two executives running the company’s day-to-day operations in recent weeks, after Sorenson stepped back to undergo treatment. Stephanie Linnartz, the marketing and technology executive who was sharing those responsibilities, was named president, the company said in a statement.

“The term that keeps popping into my head is resolve,” Capuano said in an interview. “It is humbling to be given responsibility for this great company, and bittersweet because I consider Arne a mentor and a friend. It’s also really energizing.”

Last year was Marriott’s worst ever, as the pandemic forced the company to shutter hotels, line up new loans, and lay-off workers. It finished the year with a net loss of $267 million, the largest loss from operations in the company’s history.

The world’s largest hotel company, with more than 1.4 million rooms in its system, is promoting Capuano from his role as president of the global development, design and operations services group, where he oversaw efforts to add new hotels to Marriott’s empire.

Capuano’s first job in the hotel industry was at a downtown hotel in his hometown of Baltimore, where he tabulated room bills by hand. Now, nearly 40 years later, he’s taking the top post at the industry’s largest player, overseeing Ritz-Carlton, Courtyard and 28 other brands.

Companies like Marriott no longer own real estate, and profit instead by licensing brands and providing services to property owners. Revenue growth in those asset-light strategies comes from increasing the number of rooms on which the hotel company can earn fees, making Capuano’s experience negotiating development deals crucial as the industry begins to recover.

It promises to be a tough road. Hotel demand continues to ebb and flow with Covid-19 case counts. And while vaccination campaigns are poised to unleash pent-up demand for leisure travel, it’s less certain when corporate travel departments will put employees back on the road, or whether meeting planners will see the need to book large hotels after spending the last year running conferences online.

“The pandemic has been the most challenging crisis this company has ever faced,” said Capuano. “There are destinations around the world that our customers have dreamed of visiting for years, and I am very optimistic that we can see a pretty strong rebound.”