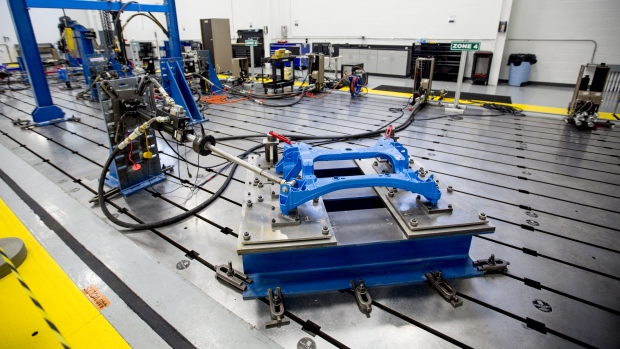 A front engine cradle is stress tested during the opening of the Martinrea International Inc. technical center in Auburn Hills, Michigan, U.S., on Thursday, May 17, 2018. , Bloomberg

TORONTO - Martinrea International Inc. swung to a large loss in its recent quarter as automotive plant closures during the COVID-19 pandemic took a big bite out of its revenues.

The autoparts manufacturer says it lost $146.9 million or $1.84 per share in the second quarter, compared with net income of $28.1 million or 34 cents per share a year earlier.

Martinrea was expected to report an adjusted loss of 74 cents per share on $420.8 million of revenues, according to financial markets data firm Refinitiv.

The company says it expects a strong third quarter as automakers replenish low vehicle inventories, with sales of $850 million to $950 million and adjusted earnings of 40 to 50 cents per share, including the newly acquired Metalsa, that will continue to be a drag on earnings for the rest of the year.