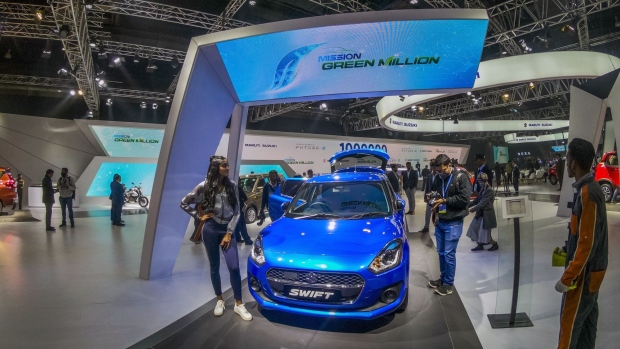 A member of the media takes a photograph of a Maruti Suzuki Ltd. Swift hatchback on display at the Auto Expo 2020 in Noida, Uttar Pradesh, India, on Wednesday, Feb. 5, 2020. The motor show opens to the public on Feb. 7 and runs through Feb. 12. Photographer: Prashanth Vishwanathan/Bloomberg , Bloomberg

(Bloomberg) -- Maruti Suzuki India Ltd., the South Asian nation’s top automaker, reported a jump in sales of its minicars and sport utility vehicles last month that helped offset a decline in demand for its most popular models.

Demand for its most popular models including the Swift hatchback waned, with the segment posting a 10% drop in sales to 51,529 units. The local unit of Japan’s Suzuki Motor Corp. posted its first quarterly loss on record for the three months through June as a nationwide lockdown to curb the spread of the virus stopped people from visiting showrooms.