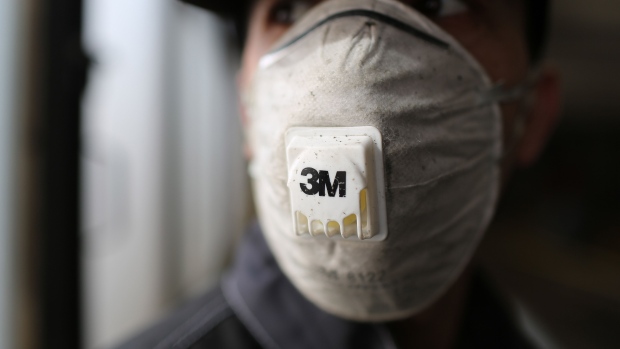 A workers wears a 3M Co. branded protective face mask during a deep-clean of GUP Mosgortrans passenger buses at a service terminal in Moscow, Russia, on Thursday, March 19, 2020. , Bloomberg

With the coronavirus pandemic driving up demand for protective gear, profiteers and unscrupulous middlemen have taken advantage. Now, one of the biggest manufacturers of the products is fighting back.

3M Co. , the maker of the coveted N95 mask that drew criticism from President Donald Trump over their availability, has filed four lawsuits in the past week against alleged price-gougers in New York, California, Texas and Florida.

The firms were seeking to sell 3M respirator masks to the Strategic National Stockpile, New York City government and a California medical center at prices as much as six times the normal cost -- while 3M said it has not increased its prices.

“Despite 3M’s extensive efforts during Covid-19, unsavory characters continue their quests to take advantage of health care workers, first responders, and others in a time of need and trade off the fame of the 3M brand and marks,” the company said in its complaints.

In taking action, the company joins a number of states in going after firms trying to sell consumer goods at inflated prices. They have threatened fines and even jail time for anyone who jacks up prices beyond what the state has deemed appropriate.

That 3M has had to rely on trademark law to police the matter has also fueled calls for lawmakers to do something.

“There is no federal price gouging statute,” though Congress is considering legislation to address prices charged to consumers, businesses and governments during the pandemic, said Gretchen Jankowski, a lawyer with Buchanan Ingersoll & Rooney in Pittsburgh.

Many state laws “typically do not apply to state and hospital purchases, but rather focus on the sale of essential goods and services to consumers.”

The Maryland Attorney General’s Office has received more than 200 complaints from consumers and sent more than 100 letters to retailers suspected of price-gouging, said Raquel Coombs, director of communications for the agency.

Among the complaints are gas stations selling toilet paper for US$20 for a four-pack, face masks for US$70 and bottles of hand sanitizer for US$11 a bottle, she said.

Elizabeth, New Jersey, officials have been going through the county’s consumer affairs office and a state procurement program to make sure offers to sell masks and other protective gear are legitimate, said Mayor Christian Bollwage.

While the city and local hospital have been able to fulfill their needs for now, “in a week or two, they’re going to be in dire straits,” Bollwage said. He joined with more than 100 mayors and county executives in a letter to the Trump administration calling for a more uniform federal supply plan.

“The system that is in place in this country is an abomination for a pandemic or an emergency,” Bollwage said. He’s calling for a “a pricing mechanism through the federal government that would alleviate all this price-gouging.”

The state actions are designed to protect consumers, but many states don’t have laws to protect themselves when they are the buyers paying the inflated prices.

The Federal Emergency Management Agency last week announced a “supply chain stabilization task force” that won’t eliminate the situation where states and health care providers bid against each other for supplies.

“As we process orders through the supply chain, we are maintaining close coordination with governors to identify potential bidding conflicts,” the agency said in a statement. “If a bidding conflict does arise, we will work closely with the state to resolve it in a way that best serves their needs.”

The bidding wars have strained state and local government budgets. A ProPublica investigation found that New York state had paid almost $250,000 for a portable X-ray machine that normally cost as little as US$30,000. Even FEMA is overpaying for the masks.

The agency awarded a US$55 million contract -- several multiples of the 3M prices -- to a company that’s filed for bankruptcy and has no employees, the Washington Post reported.

“The federal government needs to do something to remedy the conditions that have made this ripe for price-gouging and profiteering.”

3M accuses the companies in its lawsuits of improper use of its trademarks, false advertising and undermining the value of the 3M brand.

Use of trademark law is “an interesting approach” because the law is more designed to ensure consumers know the origin of goods, said Eric Moran, a trademark lawyer with McDonnell Boehnen Hulbert & Berghoff in Chicago.

While 3M may not be able to stop all price-gouging, the firms putting themselves out as being affiliated with 3M gives the company the legal basis for its suits, he said.

“If there is consumer confusion in the sales of these price-gouged mask, that’s a legitimate trademark suit,” Moran said. “It’s clear they feel that such price gouging has the potential to undermine the value of the 3M name.”

3M is trying to ramp up production of the protective respirator masks amid a drastic shortage of gear needed to safeguard health-care workers against the coronavirus, and a global effort to get as many of the masks as possible.

The lawsuits are as much about brand protection as they are an effort to fend off criticisms. Billionaire Mark Cuban is among the critics who accused the company of not doing enough to limit price-gouging among distributors.

The company reached an agreement recently with the Trump administration to import 166.5 million masks from China after Trump had criticized it and tried to stop it from exporting products to neighboring countries.

In its suits and in public statements, 3M has said it may pursue criminal cases against some firms and is supporting legal efforts to go after counterfeits.

“3M is working with national and international law enforcement, state Attorneys General, and the largest online retail and tech companies in the world to identify illegal activity and help punish criminals,” the company said. “The goal is to prevent fraud before it starts and stop it where it is happening.”

--With assistance from Richard Clough.