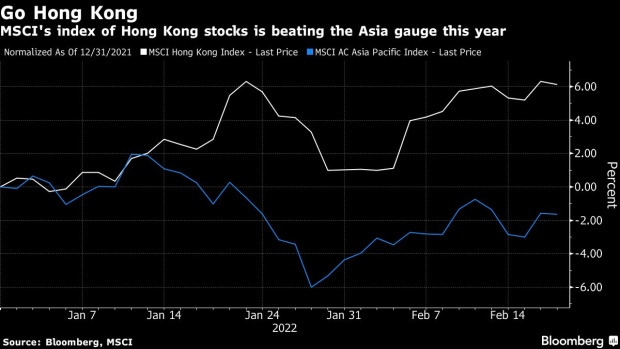 Residents queue at a Covid-19 testing facility in Hong Kong, China, on Thursday, Feb. 17, 2022. Hong Kong is planning a testing blitz of the entire city, deploying a tactic used to root out Covid-19 cases on the mainland as the financial hub struggles to get control over its most challenging outbreak of the pandemic. , Bloomberg

(Bloomberg) -- Market watchers are optimistic that Hong Kong’s plans for mass Covid-19 testing could stem the resurgence of virus cases, with stocks tied to economic reopening advancing in a volatile session Thursday.

Leveling out daily infections could ultimately lay the groundwork for an eventual reopening - even if that seems far away, they say. Hong Kong is intensifying efforts as the latest outbreak rips through the city, with local media reporting about 5,000 new Covid cases on Thursday.

While broader markets in the financial hub and in Asia were whipsawed by renewed geopolitical tensions over Ukraine, shares of Macau casino operators and cosmetics makers climbed in Hong Kong.

Further gains could help broaden the rise in the MSCI Hong Kong Index, which has rallied more than 8% since a December low, among the top-performing stock benchmarks in Asia. The advance was boosted by financials, which make up about half of the gauge’s weighting, amid a surge in global bond yields.

Here are some comments from market watchers and strategists: