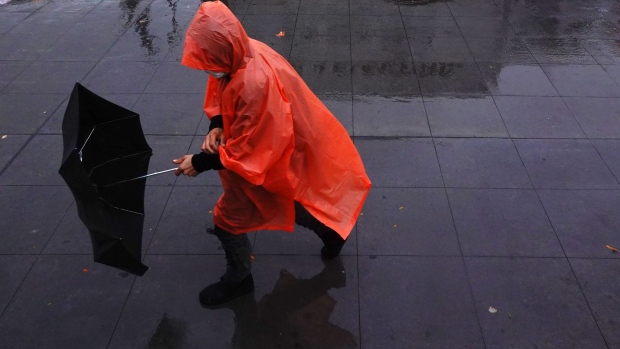 NEW YORK, NEW YORK - OCTOBER 26: A person wearing a rain poncho struggles with their umbrella during an autumn Nor'easter on October 26, 2021 in the Brooklyn borough of New York City. New York and New Jersey declared states of emergency as the storm brought heavy rain and strong winds to the area, with up to 3 inches of rain in some parts of the city. A flash flood watch is in effect in NYC until 6 P.M. tonight. (Photo by Michael M. Santiago/Getty Images) , Photographer: Michael M. Santiago/Getty Images North America

(Bloomberg) -- The nor’easter that soaked New York Tuesday swept through eastern New England, toppling trees, leaving thousands without power and cancelling school on Cape Cod in Massachusetts. Wind gusts reached 87 miles (140 kilometers) per hour in Scituate, just south of Boston, and 74 mph on Deer Island in the city’s harbor, according to the National Weather Service. Across New England from Rhode Island to Maine, wind advisories will stay up most of the day. New York’s Central Park picked up 3.3 inches (8 centimeters) of rain from the storm. Across eastern New England, 541,868 customers, the bulk of those in Massachusetts, were without power, according to PowerOutage.us. There were more than 14,000 blacked out in New York as well, mainly in the upper Hudson River Valley. The powerful nor’easter, less than 100 miles southeast of Cape Cod, has a 10% chance of turning into subtroprical storm Wanda in the next two days, according to the U.S. National Hurricane Center. The storm will drift to the northeast, where it will menace Nova Scotia through Thursday, according to Environment Canada.