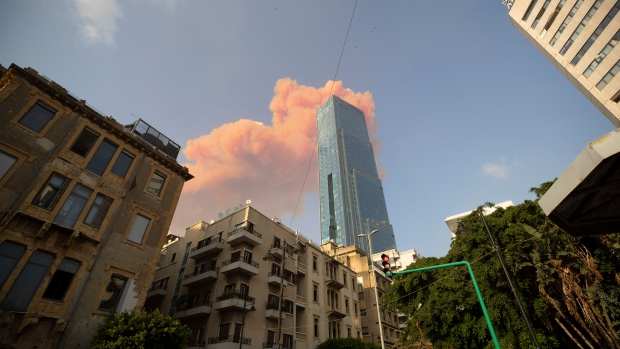 A cloud from a massive explosion is seen in in Beirut, Lebanon, Tuesday, Aug. 4, 2020. , AP Photo/Hassan Ammar

Army personnel and rescue workers sifted through mountains of rubble from a massive explosion that flattened Lebanon’s main port, looking for survivors from a blast that roared through the capital, Beirut, killing at least 100 people and wounding thousands more.

As authorities pieced together the chain of events leading up to the tragedy, TV network LBCI reported that all port officials had been placed under house arrest. Officials have blamed highly explosive ammonium nitrate equivalent to 1,800 tons of TNT that had been stored at the port for years, without saying what triggered the blast.

The government has appealed to other countries for emergency aid as concerns mounted over food supply in the import-dependent nation.

In Lebanon, outrage over the government’s role in the calamity ran high in a country already groaning under the weight of the worst financial crisis in its history, and a resurgent coronavirus outbreak. Dozens of people gathered in downtown Beirut as former Prime Minister Saad Hariri inspected the damage, beating cars in his convoy and shouting “They killed Beirut.”

The explosion was so powerful that it was heard in Cyprus, and severely damaged buildings miles away. Massive shipping containers were flipped upside down as if they were toys, and cranes melted under the intense fire that still burned on Wednesday, and was being doused by helicopters whirring above.

Aerial footage shows the total destruction of buildings caused by the #BeirutBlast. The explosion was so large it blew out windows across Beirut.

“It’s like an apocalypse,” lawmaker Yassine Jaber told Bloomberg. “Pure negligence and that’s the ultimate manifestation of how bad governance has been in Lebanon, with no accountability whatsoever, a manifestation of failure that should jolt us to wake up.”

Hospitals, already stretched to capacity by the virus emergency, were overwhelmed by a casualty toll that climbed throughout the night. At least 4,000 were injured, and dozens were missing.

The army cordoned off the port, through which much of Lebanon’s food and other supplies enter. The nation imports nearly all of its needs from abroad, including wheat and fuel, which the central bank has been subsidizing from its dwindling reserves. Wheat silos at the port were damaged, and their contents -- equal to about six weeks of the country’s needs -- were rendered unfit for consumption, Economy Minister Raoul Nehme said. He assured Lebanese there would be no flour or bread crisis.

Most other food at the port was also ruined, according to Bob Jabra, a partner at local commodity trader Ibrahim Jabra & Sons.

“The damage is massive at the port and it will take a very long time to fix and build,” Public Works Minister Michel Najjar told a local television station. The port at Lebanon’s second-largest city, Tripoli, will serve as the alternative, possibly backed up by facilities in Sidon and Tyre, Najjar said.

The Beirut port handles six million tons of shipments a year. The Energy Ministry said the state power company’s headquarters was destroyed in the blast.

WATCH: An explosion at Lebanon’s main port rocked Beirut and its suburbs, sending plumes of smoke into the skyline.

A two-week state of emergency was declared, and cabinet met later in the day to discuss this latest crisis to beset the country. The government issued a global appeal for help, its own coffers emptied by corruption and mismanagement.

Before the blast, talks with the International Monetary Fund for a US$10 billion loan had stalled over the government’s failure to agree on a reform plan, and Gulf states deflected Lebanon’s request for a bailout, afraid money would fall into the hands of Iran-backed Hezbollah militants. Officials had been discussing ways to monetize the port.

LIVE: A massive and deadly explosion at Lebanon’s main port rocked Beirut. Bloomberg's @LinNoueihed joins us live with the latest from Beirut https://t.co/BJKFBUwBoy

Prime Minister Hassan Diab said the material that caused the explosion had been there since 2014 and vowed that justice would be done.

“I will not rest until we hold whoever is responsible accountable and punish them with the most severe punishment,” he said. “It’s unacceptable that 2,750 tons of ammonium nitrate have been stored in a container in a depot for the past six years,” he said during a meeting of the Higher Defense Council.

Ammonium nitrate, a widely used commercial chemical explosive, is almost as powerful as dynamite. In 1995, Timothy McVeigh used about two tons of the substance to blow up the Alfred P. Murrah Federal Building in Oklahoma.

The explosion took place during the first of a two-day grace period that the government had given citizens before it reinforces a full lockdown with a curfew following a major spike in coronavirus cases in recent weeks.

Myriam Sawma, 31, was among the many who left their homes to buy essentials before the lockdown resumed.

“I was at the mall and we heard the first blast and then another and complete white smoke covered the area,” Sawma said. “People were screaming and running everywhere.”

Lebanon is also bracing for a verdict from a United Nations-backed court on Friday in the case of the 2005 assassination of former Prime Minister Rafik Hariri, Saad’s father. The Special Tribunal for Lebanon has accused four members of Hezbollah of playing a role in the killing, which sparked nationwide protests that brought down the government and forced Syria to withdraw troops it had stationed in Lebanon after the 1975-1990 civil war, ending Damascus’s tutelage over its neighbor.

Hezbollah has denied the allegations and said it would not hand over the suspects.