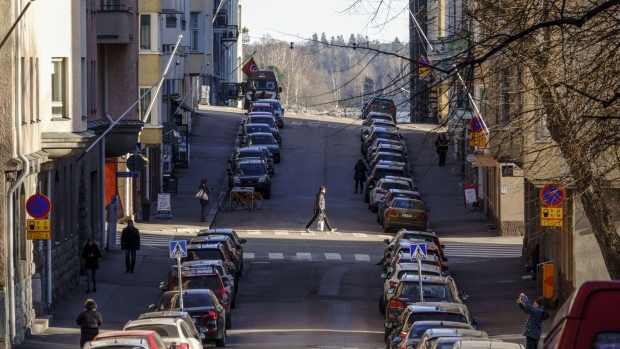 A pedestrian crosses the road in the Kruunuhaka district of Helsinki, Finland, on Thursday, Feb. 6, 2020. Finnish household debt has doubled in the past two decades against a backdrop of falling interest rates and the gradual obsolescence of cash as a form of payment. Photographer: Maija Astikainen/Bloomberg , Bloomberg

(Bloomberg) -- Two of Finland’s biggest pension funds, with combined assets of $108 billion, are determined to make their portfolios carbon neutral over the next decade and a half, in a race to dodge the fallout of global warming before it’s too late.

“Climate change is such a massive risk factor for companies in the future,” Anna Hyrske, head of responsible investments at Ilmarinen Mutual Pension Insurance Co., said in an interview.

The assumption is that the best way to protect returns is to limit investments to companies that take climate change seriously. “The carbon neutrality target will push us toward better performance,” Hyrske said.

To help reach the 2035 climate goal, Ilmarinen has developed a portfolio-management tool that gives it “a better view of companies’ environmental, social and governance abilities, and exposes risks and opportunities,” she said.

Varma Mutual Pension Insurance Co., which was the first Finnish pension fund to set a goal of carbon neutrality, plans to exit listed stocks with thermal coal exposure by 2025. The fund, which is also based in Helsinki, says low-carbon index funds will account for no more than 35% of its index investments in five years. By 2030, Varma plans to have dumped oil explorers’ stocks.

Investor commitments to carbon neutrality are multiplying fast. Net-Zero Asset Owner Alliance, which was convened by the United Nations, represents nearly $4 trillion since its launch in September. In the Nordics, its members include some of the region’s biggest insurers and pension funds, including Folksam Group, PensionDanmark, Alecta, Nordea Life and Pensions and Storebrand. They target transitioning portfolios to net-zero greenhouse gas emissions by 2050.

Rytsola at Varma is keen to ensure that setting an emissions goal doesn’t end as a mindless transfer of funds from traditionally carbon-intensive industries, like energy, to sectors that by their nature have very little exposure, like finance.

“It’s important to identify and support the best practices and best companies in the transition industries and allocate capital there,” he said.

Part of the challenge facing investors like Varma is the lack of good quality, uniform data from companies mapping out their climate credentials. There’s also a lack of sustainable products for passive investments, Rytsola said.

In recent months, both Varma and Ilmarinen have partnered with global asset managers to launch exchange-traded funds to address the latter challenge. The hope is that they’ll be able to cut the resources spent on ESG work.

“It’s indisputable that ESG goals mean more work and more resources,” Rytsola said. That has an impact on “how much it makes sense to actively manage and how much to develop products that allow passive investing while complying with ESG targets.”