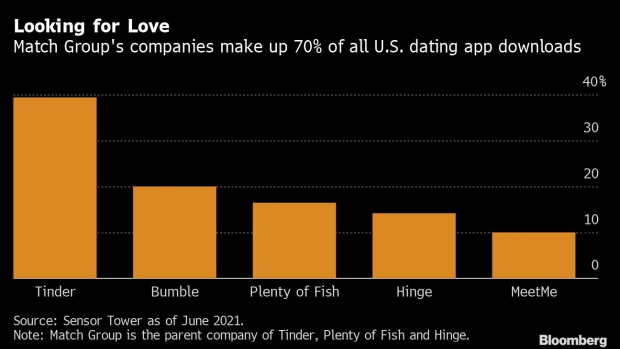 Match “is showing clear signs of strength, with more room to run as additional markets come up the vaccination curve,” Chief Executive Officer Shar Dubey said in a letter to shareholders accompanying the results. “While Covid continues to create uncertainty and the variants are increasingly a concern, our business has proven to be quite resilient.”

Match owns some of the world’s most popular dating products including Tinder, Hinge and OkCupid. The Covid-19 pandemic has forced dating apps to adapt their platforms to make virtual courting more engaging with features like video and speed-dating games. Even so, digital dating isn’t a replacement for human connection. Increased vaccinations and improving Covid-19 conditions in some parts of the world boosted the number of Match users who pay for additional features that get them one step closer to love.

The pandemic also spurred Match to think beyond romantic relationships and expand into platonic friendships with its acquisition of South Korean video technology company Hyperconnect. The dating app giant is hoping to capitalize on the rise of the “social discovery” space that is being fueled by a growing base of young users who have a higher propensity to seek out friends online.

Revenue rose 27% to $707.8 million in the three months ended June 30, surpassing the average analyst estimate of about $692 million. The company reported earnings of 46 cents a share.

Match’s star performer Tinder generated a 26% increase in direct revenue from the same period a year earlier. Paying users for all of Match’s brands grew 15% to 15 million with gains across North America and other international markets.